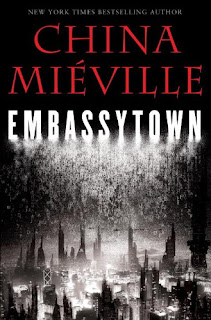 In the far future, humans have colonized a distant planet, home to the enigmatic Ariekei, sentient beings famed for a language unique in the universe, one that only a few altered human ambassadors can speak.

Avice Benner Cho, a human colonist, has returned to Embassytown after years of deep-space adventure. She cannot speak the Ariekei tongue, but she is an indelible part of it, having long ago been made a figure of speech, a living simile in their language.

When distant political machinations deliver a new ambassador to Arieka, the fragile equilibrium between humans and aliens is violently upset. Catastrophe looms, and Avice is torn between competing loyalties—to a husband she no longer loves, to a system she no longer trusts, and to her place in a language she cannot speak yet speaks through her.

In Embassytown, China Miéville throws the reader onto his science fiction world of aliens, dopples, "immersers" and humans isolated in the Arieka planet at the edge of the known universe from page one. The story is structured in a biographical first point of view format from Avice's perspective, moving between the present and past throughout the first half of the book until the timelines meet, as Miéville slowly unravels his world from the vernacular, to customs, to actions and characters.

There's nothing complacent or superficial about a Miéville novel, although of course there's a surface story. In this case we have a human colony that inhabits Embassytown in the planet of Arieka where there's eventually a breakdown between them and the indigene alien population or "Hosts" they've depended upon for survival for centuries. The break when it comes is violent with the humans' demise an almost certain fact. Avice has a front row seat and witnesses the unfolding debacle -- as both an observer and information gatherer -- that develops when the Bremen send in their own outsider Ambassador(s) to Embassytown. Avice likes to gather information, and although she's an "immerser" who has travelled the universe as part of starship crews outside of Embassytown, she doesn't like to take action. But, survival is important and eventually Avice takes her place with a band of humans attempting to save the Ariekei and Embassytown.

However, this is Miéville we're talking about and there's so much more to the story. There's much emphasis placed on language or "Language" and the effect that references, signification, similes, and eventually metaphors have or eventually come to have on the alien race -- the differences between speaking and that of real understanding, grasping, knowing. That knowing and real understanding applies to more than language though, and not just to the alien race but also to humans. That is because ignorance and dependency are also two strong subjects that apply to both humans and aliens in this story.

Miéville's aliens are intricate and mesmerizing. I've never read anything like them and for a science fiction fan they can become an addiction (I was blown away by his aliens in Perdido Street Station). There is certainly nothing human-like about the Hosts or their environment in Embassytown. Interestingly enough as alien as they are depicted, the Ariekei ultimately represent a colonized indigenous population. As such, although initially they seemingly retain power, they'll never be the same again because of their interactions with the human (or outside) race. However, it is through their interactions with humans, or perhaps because of the contrasts shown, that the aliens in this story are most effective.

The humans also have an intriguing society where ignorance and dependency, whether chosen or cultivated, are both central to their world. The planet depends on the Bremen to provide products and news from the outside world. The people of Embassytown are solely dependent on the Hosts/aliens for everything: from the air they breath, to food, to the space (town) where they live. Yet, they happily remain quite ignorant about the Hosts and the planet as a whole. Humans are also dependent on Ambassador(s) to be the go between for them with the Hosts, placing Ambassador(s) at the top of the hierarchy. Plus, the majority of people remain ignorant (or don't want to know) how things really happen -- political intrigue, power plays, abuse of power or cruelties that include inhuman acts -- as long as their lives continue to move in the right direction.

Does any of this sound familiar? This is one of the aspects of science fiction that I love the most -- how a writer takes and bends current or historical events and places them in what seems like a completely alien world and makes it work.

The way Miéville uses Avice's memory, which of course is colored by distance and personal baggage, is quite effective. Avice makes an interesting biographical narrator and I think in many ways realistic. Some of the information given by her is personal, only relevant to Avice's character including her indifference to people or dismissal of events with her personality shaping the story, and other times relevant to the overall story.

Overall, Embassytown by China Miéville is a fascinating science fiction read where the writer throws the reader into his creative world and slowly reveals it through the first half of the book, with some much appreciated literary content in the middle of it all, and lots of action and somewhat expected results through that second half of the book. This science fiction tale might not be for everyone, but as with my previous experience with  this author's work once begun I certainly couldn't stop reading until that last page was turned.

See biography and list of Miéville's books here.
Posted by Hilcia at 1:18 PM