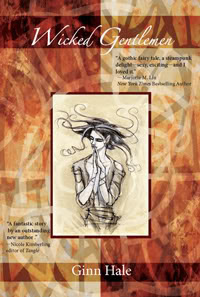 Belimai Sykes is many things: a Prodigal, the descendant of ancient demons, a creature of dark temptations and rare powers. He is also a man with a brutal past and a dangerous addiction.

And Belimai Sykes does not work for free and the price of Belimai's company will cost Captain Harper far more than his reputation.

From the ornate mansions of noblemen, where vivisection and sorcery are hidden beneath a veneer of gold, to the steaming slums of Hells Below, Captain Harper must fight for justice and for his life.

His enemies are many and his only ally is a devil he knows too well. Such are the dangers of dealing with the wicked.

Using heavy atmosphere, unforgettable characters and excellent prose, Ginn Hale builds a world in Wicked Gentlemen that grabs you from the beginning and stays with you even after you turn that last page.

Hale builds her world through the first half of the book and using names like "Brighton House of Inquisition," "White Chapel," and "St. Christopher's Park" in Crowncross, the Holy Capitol and"High Tangle," "Low Tangle" "Underchapel Parish," and "Good Commons," in Hopetown (also called Hells Below), we get a sense of an alternate London and its surrounding Parishes. A familiar setting becomes otherworldly and dark.

Hale's Prodigals are descendants of the original fallen Demons who abandoned Damnation (or hell) by signing the Covenant of Redemption. It was the promise of Salvation for themselves and their descendants that made them leave their dark kingdom below. After three hundred years the Prodigals are no longer magnificent and that promise is now a double edged sword.

At the beginning of Wicked Gentlemen, Belimai Sykes seems almost familiar, someone reminiscent of an Arthur Conan Doyle character. The setting where we first meet him is a dark library in his home, in what seems like an alternate dark London with gaslights on the streets. Almost immediately, as part of his personality, we encounter a dry, almost morbid sense of humor and are exposed to his shameful addiction. All these facts together with his occupation, that of a detective, help with this sense of familiarity. However as we go along, although these characteristics are very much a part of Belimai, he emerges as a unique and arresting individual.

The first part of the book -- "Mr Sykes and the Firefly" -- is told through Belimai's point of view and as we get to know his thoughts, we see he is not exactly the nicest of creatures. Indeed with a bit of a twist, Belimai would make an excellent villain. I found him to be an enjoyable, cynical, dry, self-destructive and flawed character.

The moment when Belimai meets Captain Harper is sharp, focused and dark. I loved the exchanges and chemistry between these two -- neither one a nice man/creature, neither one an easy character to like at first. If Belimai is a Prodigal and a demon, then Harper is an Inquisitor and his biggest nemesis, and that is exactly what it sounds like. As in the olden days in this world an Inquisitor is charged with righting religious wrongs, usually through torture. In Hale's world he also dispenses justice and becomes a combination priest and policeman. The Inquisitors in this case are usually in charge of making sure Demons are purified and stay that way. Belimai explains it best:


Harper stood and opened his long black coat, I caught sight of the white priest's collar at his throat as well as the pistol holstered beneath his left arm.

That pairing fit the Inquisition perfectly. The white band proclaimed the captain's authority to judge and redeem the souls of those awash with sin. The pistol embodied the very earthly duty of each man of the Inquisition to enforce and uphold the law. Salvation became far more appealing when damnation was faced at gunpoint.

Belimai and Harper's personalities emerge slowly as they solve a dangerous mystery together and quite a few interesting secondary characters are introduced. A more intimate relationship between Belimai and Harper is also building at this point and the development is slow and well done. This mystery is successfully solved within the first part of the book as Hale continues her world building, character development and introduces a new mystery in the second part of the book.

The second part -- "Captain Harper and The 62 Second Circle" -- picks up at the end of part one and it is told in third person through Harper's perspective. This is where we really get to know what this man is capable of -- his strengths and weaknesses. Harper believes in justice but doesn't have the heart of a zealot. There's a lot to discover and I loved the mystery and darkness in him. The conflict presented in this part of the book was quite intricate and I was happily surprised by the resolution at the end.

The intimate relationship between these two individuals is key to the story. There is sexual tension and there are two encounters between Belimai and Harper, but it is the growing feelings they have for each other and the realization that there could be more for them that really made that part of the story special for me.

In Wicked Gentlemen, Ms. Hale presents a complete book with all the ingredients I look forward to in this type of story; from the world building to characterization, plot and prose, this was a winner for me. There will be a sequel to this book and I'll be waiting impatiently for it.

You can find this book here.

Originally posted at Musings of a Bibliophile August 17, 2009
Posted by Hilcia at 8:23 AM