This 'n That: I'm back, YA LGBT Books Charity Campaign, Vacation 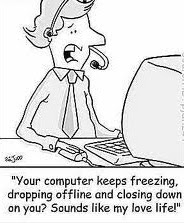 Hi everyone! My computer was resuscitated. I've no idea what happened, but my husband found help and somehow gave it CPR and got it to work again. It's still going in for a nice check up at the Apple store, though.

I've missed almost a whole week of returning emails and posting, although admittedly that had as much to do with cleaning up at work as I get ready to go on my week's vacation, as it did with computer problems. Lots of late nights and exhausting days. But I did finish reading ONE whole book! The Son of Neptune by Rick Riordan, the second book in the young adult fantasy series Heroes of Olympus series. I'll be reviewing that book!

In the meantime while away, I found out that Steve Berman editor of Speaking Out, the young adult anthology I reviewed recently, is starting a charity campaign to donate books to school libraries. I love it! This is a wonderful project and one that I wholeheartedly support. There is such a need out there for books like Speaking Out, and there's just not enough inspiration (or literature in schools) for LGBTQ kids. Here are Mr. Berman's own words on the matter:


"According to GLSEN (the Gay, Lesbian & Straight Education Network), a 2009 National School Climate Survey revealed that nearly 9 out of 10 LGBT students suffer harassment in school because of their identity.

While there has been renewed calls for legislation to fight homophobia and bullying, while there have been countless videos of "It Gets Better," kids are still dying by their own hand. And some kids are seeing the It Gets Better campaign as a bit empty--they want to know when does it get better.

I edited Speaking Out: LGBT Youth Stand Up to offer teens stories that aren't about coming-out but rather about living life openly as well as overcoming intolerance and bigotry. I wanted to inspire readers, to help them realize that they are not alone or powerless, that their voices can be heard."

-------------------
And last, as I mentioned above I'm going on vacation! Yesss! I mentioned before that I would be around, and later there were plans to leave for a few days for places unknown (lol!), but due to a (another) health-related family emergency that cropped up yesterday, I will be hanging around the area after all. My husband and I will be taking advantage of living across New York City for the week, and will be celebrating his birthday too!