Touched by Light by Catherine Spangler 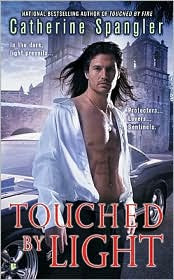 WARNING: You'll find some spoilers in this long review.

Touched by Light is the third installment in Catherine Spangler's Atlantis based paranormal romance series. I liked the first two books in this series, Touched by Darkness (Book 1) and Touched by Fire (Book 2), they kept me interested enough to continue reading -- both of them were B to B- reads for me.

Spangler introduced us to a world based on an Atlantis that existed millions of years ago and was destroyed by evil Atlantians. The souls of the good Atlantians, or warriors are reincarnating into "Sentinels" and it takes place in contemporary times. The souls of the evil Atlantians or Belians, those who destroyed Atlantis, are also reincarnating and committing terrible crimes. The "Sanctioned" supervise Sentinels and are more powerful, older and not altogether human. Over them, are the "Highly Sanctioned" -- spirits or lights who don't reincarnate, at least not so far. Sentinels track down and capture the souls of the Belians who are actively committing crimes. Once they have the evil/corrupted soul, it's dispatched to Saturn where it is restricted to do penance until purified.

Of course there's a catch, Sentinels cannot sense Belians unless they find a "Conductor." Usually a Conductor is from the opposite sex, and he/she can help the Sentinel find the Belians best by having a "sexual conduction"-- although not necessary, it's the best way. The reason for this? Sentinels are spiritual beings who can only see psychically through the "upper chakras." Belians are earth bound and use the "lower chakras." Conductors allow Sentinels to use those "lower chakras" and that is how they have visions to pin point the Belians. This is where lots of the fun can be found in these books, especially if you like the erotic mixed with the paranormal.

Touched by Light focuses on Julia Reynolds and Adam Masters.We met Julia in Touched by Fire and we know some of her history. We know she was raped twelve years ago and as a result, and by choice, she has become a bitter, lonely woman. Her main focus are her career as a professor at the local University and making sure her sister Marla, who is also a Conductor, is safe and happy. She wants nothing to do with her psychic abilities, Sentinels or visions -- especially if Adam Masters is involved.

In the last book Adam, a Sanctioned, figured out that he and Julia are perfectly matched. Something that is unheard of as the Sanctioned are celibate and don't have mates or perform conductions -- that is something left to the Sentinels. Now, however, Adam needs Julia. One of his Sentinels is missing in San Antonio and there have been violent Belian activities in the area. He suspects that Matt, who lost his wife recently to a Belian attack, has fallen to darkness. The danger is unimaginable and unprecedented, and only someone very powerful can take down a Belian who is siphoning off the powers of a Sentinel.

Talking Julia into helping won't be an easy task for Adam. She just found out her rapist will be released from prison within a few days and memories of the horrible event drive her to loose control. Control has been Julia's long-term companion and loosing it does not a pretty sight make -- especially after too many drinks and a confrontation with Adam. After more than a few tiring confrontations and manipulations by Adam, Julia finally agrees to help and off they go.

I'm afraid I lost patience with Julia early in the book. I understood that because she was raped, she needed to resolve more than a few personal issues. However, in my opinion, Julia had a huge case of the nasties. One minute she was gloaming Adam in her mind and the next minute she was hitting him with her cane -- she limps due to the attack by the rapist. Her back and forth, yes/no, I want him/I hate him, went on and on throughout the whole book (almost to the end) to the point where it just frustrated me. She was supposed to be a strong heroine, yet she allowed herself to be manipulated into almost everything.

Adam manipulated Julia into helping him, he even manipulated her into an engagement-- not because she didn't want to help him or because she didn't have the hots for Adam, but because she would not admit that she wanted both. Julia acted as if she resented Adam's manipulations, yet she would not make the necessary decisions to stop them. She accepted them grudgingly and waited for the last minute when there were seemingly no other alternatives left open to her. One of the most annoying heroines I've encountered in a book in recent times--even with her terrible history, I couldn't make myself sympathize with her.

As a Sanctioned, Adam is super powerful. His responsibilities encompass all the Sentinels and Conductors in Texas. He is like a GPS unit who can feel every one of these people who are under his care. A super alpha, Adam is supposed to be cold, brilliant, ruthless and manipulative. He really wasn't all that overly alpha or cold or ruthless, although he was plenty manipulative -- he at least showed warmth and I liked him for that. He attempted to show Julia some tenderness. I don't think it was his fault that she was unprepared to accept it. Although, the whole idea of Adam being celibate all that time sounded like a really great set up for the book, it doesn't seem to have panned out. Their sexual encounters were okay, but personally I didn't find them all that erotic when compared to the other books.

Spangler's world also suffered in this book in my opinion. During the Touched by Fire, Julia was supposed to have these super-conductor powers and used them effectively. In this book she was less than effective, more like a left zero in that respect. Adam was also less than effective -- his powers just didn't hold or live up to expectations.

As a Sanctioned, Adam is supposed to "feel" and "know" where every single one of his Sentinels is at every single moment-- yet when at different times, Matt surfaced from being possessed by the Belian (some intervals longer than others), Adam attempted to contact him by cell phone. Cell phone? What happened to his internal GPS system? He could tell where Julia was having lunch, but could not pin point Matt when he resurfaced for longer periods of time? Sorry, that just didn't make sense to me.

Another thing that did not make sense? The Sanctioned are supposed to be celibate and not/never paired with a Conductor. Throughout Touched by Light, we are told over and over again how rare this pairing between Adam and Julia is in their world. Yet, the reasoning behind it is never explained. There are no consequences for Adam either... I mean, I kept expecting for something to happen to Adam because of this pairing, or for there to be some sort of meaning behind it-- but nope, nothing.

There are a couple of secondary characters in this book that were well developed and worth a mention. I'm concentrating on Miriam, Julia's student. She turns out to be a psychic and a legitimate Gypsy. For me, Miriam was one of the most interesting characters in this book. Not only because her background and her abilities are totally different from those exhibited so far by the women in these stories, but she was a breath of fresh air compared to Julia. Her psychic abilities were strong and I found myself wanting to learn more about her. I loved her personality and her relationship with her father. Her background is a bit of a mystery and it just made me want to know more. This is her second appearance in the series and her development in this book was excellent.

As you can see, Touched by Light is definitely not my favorite book in this series. This was a tough review for me, especially since the book is by a favorite writer. I give this one a C-

You can visit the author here. You can read an excerpt for Touched by Light here.

Originally posted at Musings of a Bibliophile June 23, 2009
Posted by Hilcia at 3:40 PM