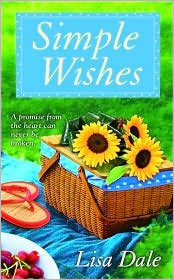 GOING HOME IS THE LONGEST JOURNEY OF ALL...

Adele couldn't wait to put her lonely childhood and hometown behind her. Amid the bright lights and hustle and bustle of New York, she built a life for herself--until one terrible mistake brought it crashing down. Now Adele is running again, this time to a cottage she inherited from her mother in rural Pennsylvania. And she's about to realize that a small town has more to offer than she ever dreamed.

An Artist and woodworker, Jay Westvelt knows a thing or two about living in the country. Adele is intrigued by her mysterious and sexy green-eyed neighbor, a man who took care of her house and soon cares deeply for her. But even as Adele's heart begins to soften toward him, secrets from her mother's past threaten to send her fleeing back to the city. Can Jay convince her to stay with him?

Only if she can learn an important truth: that happiness begins with SIMPLE WISHES.

I've been in the mood for contemporary romances lately and decided to search for one from a new-to-me author. I do this every so often and call them my random picks. If I get lucky, I find a new author whose work I'll follow. I was unaware Simple Wishes is Lisa Dale's first contemporary romance when the above description caught my attention. As it turns out this book is about much more than the romance -- although the romance is there, I didn't find it to be the focal point of the story.

Adele is returning to her mother's old cottage in Notch Lane. She never planned to return after Marge, her mother, died years before. The place held too many bitter memories of her lonely childhood and their estranged relationship. Now, she has no choice but to use it as temporary living space to regroup while searching for employment in New York City.

Getting back to the City as fast as possible, that's what Adele plans to do. She doesn't want to deal with old memories, hurts and guilts. She left home at age seventeen and never saw or spoke to her mother again. Theirs was a complex and dysfunctional relationship leaving Adele with conflicting emotions that affect her even as an adult. Returning to Notch Lane might force her to confront emotions she has ignored for too long. Dale does an excellent job of portraying both Adele's ambivalent feelings, as well as her anger and resentment towards Marge--an anger that is not allowing her to move forward with her life.

It is the leftover anger and resentment that Adele feels for her dead mother and the unresolved issues in their relationship that drive this story. Adele must come to terms with her emotions and confront her past in order to have a future. By now, she has become adept at running away when things get uncomfortable--the type of person who is most comfortable with superficial relationships, be they sexual or platonic, Adele cultivates neither. Intimacy is foreign to her.

The city, and all the people in it, were unpredictable, disposable on some level. Subject to change. So did she like it that way? It wasn't really a matter of like ordislike. She felt she belonged in the city, belonged to the city.


But Notch Lane is not New York City and Adele's life is about to change. Living in an isolated and rural area in the mountains, she has no choice but to meet and interact with her immediate neighbors. Soon she finds herself getting involved with them more than she likes or even appreciates.

Beginnings happen in moments, Adele thought to herself. Not hours, not days, not months. Life breaks down into scenes, sequences, and you hold them to you, examining each one by one, like picking through a handful of pearls.


When Adele meets Jay Westvelt, he is not what she expects he is more. Jay is a very private person and a brilliant artist. A man who has made very clear choices and knows what he wants from life -- the opposite of Adele. In many ways, Jay understands Adele better than she understands herself. Dale develops their personal relationship and eventual romantic involvement slowly. These two people get to know each other and their initial dislike grows into friendship, attraction and eventually into passion and love. Their coming together is not an easy or comfortable one. Adele's many issues, including her intimacy problems and inadequacies, make the conflict a difficult one to resolve.

Adele's closest neighbors in Notch Lane, Pat, Beatrice and their teenage granddaughter, Kayleigh, are very important to the story. Beatrice, a Korean born lady, becomes more than a friend to Adele. It is through Beatrice, who was a friend to Marge that Adele works through her resentment and anger towards her dead mother. It is with Beatrice Adele learns the intimacy and boundaries of friendship.

Adele is a thirty-one year old woman with adult feelings, but emotionally she seems to regress at times, almost as if she were stuck in an adolescent time warp. The relationship that she develops with Kayleigh and Kayleigh's own youthful struggles help Adele work through some of those issues. You will find this is the type of contemporary where secondary characters are as much a part of the plot as the main characters. In Simple Wishes they have as much to offer, as do Adele and Jay.

It's important to point out that although I was initially attracted to Simple Wishes by the romance, I was actually pulled in to the story first by the writing, and then by the characters. Dale writes more than a few beautiful passages in this book and although I did find some inconsistencies in the point of view--sometimes in the third person, sometimes in the first--it's always presented from Adele's perspective. The story itself is character driven and centers more on Adele and her personal struggles than on the romance, although the romance itself becomes part of those struggles and the resolution is sweet and worth the wait.

Development is extremely well done for both the main and secondary characters. Adele is explored to the fullest and there are few if any questions left unanswered about her by the time we reach the end. Beatrice and Kayleigh's characters are so well developed and are so key to this story that at times they become central--particularly Beatrice. Adele and Beatrice's relationship almost overshadows Jay and Adele's; it was that deep and meaningful. Adele's struggles were frustrating at times, but her growth, although slow, was palpable and well done. On many levels, a story about love and forgiveness.

Since this book was a random pick--will I look for Lisa Dale's next release? Yes.

Originally posted at Musings of a Bibliophile June 3, 2009
Posted by Hilcia at 3:51 PM

Email ThisBlogThis!Share to TwitterShare to FacebookShare to Pinterest
Labels: 2009, Contemporary Romance, Grade B, Lisa Dale, Musings of a Bibliophile, Reviews