Review: Just One of the Guys by Kristan Higgins 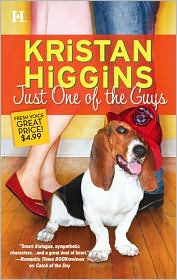 Being one of the guys isn't all it's cracked up to be...

So when journalist Chastity O'Neill returns to her hometown she decides it's time to start working on some of those feminine wiles. Two tiny problems: #1 - she's five-foot-eleven of solid girl power, and #2 - she's cursed with four alpha male older brothers.

While doing a story on local heroes, she meets a hunky doctor and things start to look up. Now there's only one problem: Trevor Meade, her first love and the one man she's never quite gotten over - although he seems to have gotten over her just fine.

Yet the more time she spends with Dr. Perfect, the better Trevor looks. But even with the in-your-face competition, the irresistible Trevor just can't seem to see Chastity as anything more than just one of the guys...

This week I decided to start by reading a contemporary romance that sounded right up my alley and I thought, why not? I'll start with something fun and easy. Just One of the Guys by Kristan Higgins was supposed to be a book with two of my favorite tropes: friends to lovers and a secret crush. Well, it did have both those tropes, but there were other factors involved.

This story is told in first person point of view from Chastity O'Neill's perspective. She's a journalist who recently moved back home where her whole family lives-- her parents, four brothers, their wives and children. Her father, brothers and her "forever" love interest, Trevor, are all firemen or in the life-saving business. Chastity is attractive, but some consider her too tall and too athletic looking. She's insecure about her looks and looking for a permanent relationship and wants to get over the crush she's had on Trevor since the third grade.

Chastity's insecurities and her search for that permanent relationship set up the book and some truly hilarious situations. She has great wit and her snappy remarks are a hoot! The relationship between Chastity and her brothers are beautifully developed and you can really feel the warmth between them. The brotherly/sisterly love and banter is great. The parents are going through a divorce and that part of the story is quite heartbreaking -- at least it was for me.

One of my problems with this book was Trevor, the hero. He was likable as a guy, thoughtful and more than a bit insecure. But as a hero, I'm not sure weather he was likable or not... he was a kind of shadowy figure in the book seen through Chastity's eyes and for most of it, it seemed as if he cared for her as a sister or a friend. I never felt the chemistry between them.

I know this story is in first person point of view and we're seeing it from her perspective, but usually, somehow as readers, we get the hint -- even when the heroine doesn't -- that the hero wants her. As a result, because the first person point of view wasn't well defined, there seems to be a disconnect in this story. The hero not only felt shadowy to me, but at times he felt more like a secondary character.

My other problem? There's a triangle for a while when Chastity finds someone she commits to, Ryan the surgeon, and she makes some decisions that bothered me. Now, Ryan was pretty well developed and I thought he took Trevor's place in the book -- not in the romance but in development. I thought this relationship really showcased Chastity's desperation. I'll admit that it engendered some funny moments as well as truly bad judgment on her part, but again... where was Trevor?

Things worked out well in the end for Chastity. I just wish we had more scenes like the last one in the book when Trevor and Chastity actually connected. The excellent humor and the great family relationship kept me reading this book to the end. I give this one a C

Originally posted at Musings of a Bibliophile on June 13, 2009
Posted by Hilcia at 3:44 PM