On Favorite Books and Endings

I love nothing more than a great ending to a favorite series or trilogy. I know... it's a double-edged sword, we look forward to that next book anxiously and with some series we love, we wish they would never end. But all good things must come to an end.
I started reading a trilogy in 2005. The first book was one of my 'random picks' and BOY did I get lucky! It was one of those books that grabbed me and wouldn't let go from beginning to end. I liked it so much, I re-read it as soon as I finished and then I re-read it again. 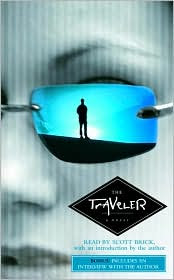 The book was The Traveler (First Book of the Fourth Realm) by John Twelve Hawks.
This trilogy is difficult to categorize, it has been compared to films like The Matrix, Star Wars and Kill Bill, but I can't say that it's similar or the same as any of them. It deals with good vs. evil, social control, free will and alternate dimensions. John Twelve Hawks uses current science and technology, makes it feel like science fiction and at the same time makes you look around and wonder. He even gives us a taste of string theory to go with the rest.
We meet Travelers -- able to attain pure enlightenment by traveling to other dimensions and bringing back knowledge, they are considered prophets who have influenced the course of history for untold generations. In the Fourth Realm Trilogy we meet two Travelers, Gabriel and Michael Corrigan, brothers who are just discovering their gifts.
Every Traveler must have a Harlequin to protect them. Harlequins are a fierce group of warriors willing to sacrifice themselves to protect their appointed Traveler. They are trained from childhood in different martial arts styles, samurai swords and a myriad of weapons and undercover strategies they use to defend themselves and their charge. In The Traveler we meet Maya. She has been chosen to protect the Corrigan brothers and must travel from Europe to the United States, find them and keep them safe.
The brothers are being hunted by The Tabula --- a global society composed of very powerful men and ruthless mercenaries who have hunted Travelers for generations. This is a group determined to inflict order on the world by controlling it, and they view Travelers as a threat that must be eliminated.
This is the basis of the trilogy and how it all begins.

The second installment The Dark River (Book 2 of the Fourth Realm) was released two years later in 2007. Of course, you know I bought it as soon as it was released. In this book Gabriel, Maya and Michael's story continues and is expanded. The three of them make choices that take us along for a dangerous ride. Maya and Gabriel's relationship is developing and there's more than a tentative bonding between the two. But Twelve Hawks left us at a crucial point in the story and I've been waiting a long time for the end to arrive. 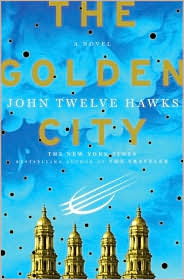 Of course I've been following all news about the upcoming book. Recently it was announced the last book of the trilogy was to be released September 2009, but there was no actual date on the announcement. I didn't want to get my hopes up... and then, finally! Last week, a final date and a Cover! Yes!
The Golden City (Book 3 of the Fourth Realm) will release September 8, 2009.  I will be there with bells and whistles on! Ends and favorite books... it's a beautiful thing.
Posted by Hilcia at 10:05 AM