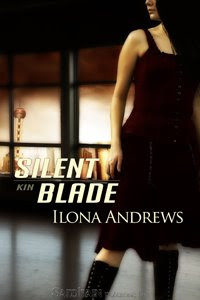 On Meli Galdes' home planet, the struggle for power is a bloody, full-contact sport-in business and on the battlefield. For years her lethal skills have been a valuable asset in advancing her family's interests. She's more than earned her right to retire, but her kinsmen have one last favor to ask.

Kill the man who ruined her life.

Celino Carvanna's razor-sharp business acumen-and skills with a blade-won him the freedom to do as he pleases. There's only one thing he can't seem to control-his reaction to the mysterious woman who tantalizes his senses. Her eyes alone set his blood simmering, stirring ridiculous adolescent fantasies about breasts and honey. With a few words she dissects his soul. Who is she? And how does she slide so easily under his well-guarded skin?

It's almost too easy to draw Celino within the kill zone. Meli plans to revel in him in. Drink him in. Wring every drop of pleasure out of every moment.

And when she's sure he belongs to her, she will finally repay a decade's worth of pain-in a single, brutal dose of reality.

A Romantic Sci-Fi Futuristic short story by a favorite writer, Ilona Andrews -- how could I pass it up? I couldn't, of course. Silent Blade is not part of the Kate Daniels books or the upcoming series. Instead with this short story, Andrews gifts us with a complete romance set in a futuristic world--sharp, dangerous and sexy, we get more than just a glimpse of the world our characters inhabit.

Meli Galdes is biologically enhanced and has special abilities inherited through her bloodline. She is an oddity and perfect for her role as an assassin for her kinsmen. But Meli is tired of killing and all she wants to do is finish that last job and retire to her home and garden. Celino Carvanna's enhancements are different from Meli's but just as deadly. He is more than just a brilliant businessman. Celino is also the head of his family -- a super alpha, arrogant and unscrupulous man who is used to getting what he wants and whose fate has led him straight to Meli.

I loved Meli's character. In Silent Blade, Andrews gives us a heroine that is both a dangerous assassin and a vulnerable woman. Meli is the type of heroine I love in any romance -- a woman who is strong enough to love without becoming a doormat to the alpha hero or so strong that she makes him look like a wimp. Celino is an arrogant and ruthless alpha hero who is about to get his comeuppance, but he is also the type of man I like -- one who knows when to be aggressive and when to back off.

The world in which Meli and Celino live is developed so that we understand the reasons for their actions and reactions. We see both of them in action within their respective worlds -- Meli as an assassin and Celino as the ruthless businessman he is -- and learn their personal histories, but we are definitely not short changed when it comes to the romance or their intimate encounters.

This is a short story and I don't want to give away too much or take away from your enjoyment. I have no complaints about this read, except to say I enjoyed it thoroughly and wanted more. I give this one an A.

Originally posted at Musings of a Bibliophile June 10, 2009
Posted by Hilcia at 3:47 PM

Email ThisBlogThis!Share to TwitterShare to FacebookShare to Pinterest
Labels: 2009, Grade A, Ilona Andrews, Musings of a Bibliophile, Reviews, Sci-Fi/Romance