Review: The Sea of Monsters (Percy and the Olympians, Book 2) by Rick Riordan 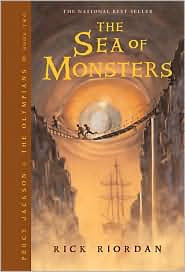 Percy Jackson's seventh-grade year has been surprisingly quiet. Not a single monster has set foot on his New York prep-school campus. But when an innocent game of dodgeball among Percy and his classmates turns into a death match against an ugly gang of cannibal giants, things get... well, ugly. And the unexpected arrival of his friend Annabeth brings more bad news: the magical borders that protect Camp Half-Blood have been poisoned by a mysterious enemy, and unless a cure is found, the only safe haven for demigods will be destroyed.

In this fresh, funny, and wildly popular follow-up to TheLightning Thief. Percy and his friends must journey into the Sea of Monsters to save their camp. But first, Percy will discover a stunning new secret his family-one that makes him question whether being claimed as Poseidon's son is an honor or simply a cruel joke.

The Sea of Monsters is the second installment in this five book Young Adult adventure series. After reading the first book in the series, The Lightning Thief, I couldn't wait to find out what happened to Percy and his friends.

As you can see from the above description, the book picks up at the end of the school year when Percy and his friends are due to return to Camp Half-Blood for the summer where they need to continue with training. However, by the time Percy, Annabeth and their new friend Tyson make it there, they realize that the place is no longer the same. It's being besieged by evil, as the magic borders are not holding. Thalia, Zeus' dead daughter's pine tree has been poisoned and this poison is seeping into everything.

In the meantime, Percy is dealing with more than a few friend troubles. He is having horrible dreams about his friend Grover who at the end of the last book went on a quest seeking the god Pan. In his dreams, Percy sees him running from a monster, terrified and in danger. He knows he must go save Grover... but even Annabeth doesn't believe him. Percy also discovers a truth about his new friend Tyson that makes him feel angry, uncomfortable and guilty. These conflicted emotions and reactions put him at odds with himself and with his friend Annabeth and they argue constantly over Tyson. The camp is no longer the heaven he had been looking forward to all year.

If you are familiar with the myth of Jason and the Argonauts, you know where we are headed. Percy must go with Annabeth and Tyson through the Sea of Monsters to save his friend Grover and Camp Half-Blood. His quest is full of danger and all kinds of new monsters we would encounter in Greek mythology are introduced -- Cyclops, sirens, beautiful sea horses and more. At times, it's easy to recognize them immediately and other times it takes a little while to figure out who is who. It's a tough journey for Percy and his friends. They're not always sure who is evil and who is redeemable -- but the action is non-stop.

The overall core of the series continues and, of course, it's the reason for all these events. Western civilization must be saved and Olympus with it. The real enemy is well known by now--Kronos, father of the gods and king of the Titans, the most evil of them all is behind these events. In this second installment his evil plans begin to take shape. As a character, at this point, Kronos is a shadowy figure -- we meet him sparingly through dreams -- however, we do meet his evil underlings and through them, Annabeth and Chiron we learn his history of violence and cruelty.

As a hero, Percy is slowly learning the weight and seriousness of his responsibilities. His mentor and teacher Chiron, the centaur, tries to explain it to him:


"Humans don't exist on the same level as the immortals. They can't even be hurt by our weapons. But you, Percy--you are part god, part human. You live in both worlds. You can be harmed by both, and you can affect both. That's what makes heroes so special. You carry the hopes of humanity into the realm of the eternal. Monsters never die. They are reborn from the chaos and barbarism that is always bubbling underneath civilization, the very stuff that makes Kronos stronger. They must be defeated again and again, kept at bay. Heroes embody that struggle. You fight the battles humanity must win, every generation, in order to stay human..."

Percy is beginning to realize he might be the "key" to many of the events happening around him and he is just not sure he'll survive. Our friend Percy and his friends are brave and true but will they continue to make the right decisions? Heroes have free will and the gods cannot interfere. Riordan leaves this installment with a twist at the end that will make it even tougher for Percy and the gods to defend themselves.

As a sequel, The Sea of Monsters did not disappoint me, it is just as exciting as the first book. The wonderful world Riordan created continues to be grow and manages to seem both simple and complex. As with the whole world of Greek mythology, there is always a dual meaning or a lesson to be learned in Percy's world. In his world, the anger of a child feeling ignored by a parent takes a dangerous twist and being ashamed of a relative for his inadequacies turns into a painful lesson.

Choosing my favorite Chapter titles from this book was tough, but I finally settled for "We Hail the Taxi of Eternal Torment" and "I Have the Worst Family Reunion Ever." Through the whole adventure, excitement, the dangers and funny moments, what really wins the day on this one are loyalty, friendship and compassion.

I'm going on to read the 3rd book in the series, The Titan's Curse. I give this second installment another Solid B.

You can visit Rick Riordan and find out more about this series here.

Originally posted at Musings of a Bibliophile June 22, 2009
Posted by Hilcia at 3:53 PM

Email ThisBlogThis!Share to TwitterShare to FacebookShare to Pinterest
Labels: 2009, Grade B, Musings of a Bibliophile, Reviews, Rick Riordan, Young Adult