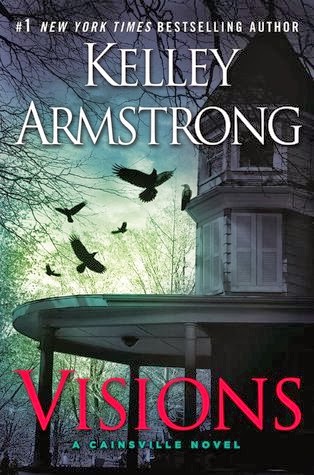 Omens was more of a thriller with an edge of horror and a small dose of fantasy than urban fantasy. I personally loved it. However when reading Visions, it quickly becomes evident that Omens is a very important base whereupon this urban fantasy stands. Key questions and clues are there, while Visions is where the urban fantasy aspects of this series strongly emerge. More importantly, in Visions the main characters take shape, emerging stronger and more intriguing than in the previous book.

Visions begins the day after Omens ends with Olivia finding the dead body of a woman in her car. While waits for help from Gabriel, the body disappears, and she questions whether it was a death omen. Their brand new partnership is broken when Olivia distances herself from Gabriel after learning about his deal with her ex-fiancé James. Feeling hurt and betrayed by Gabriel, Olivia re-establishes contact with James who wants her back, while at the same time beginning a sexual relationship with the young biker and son of the Satan Saints' gang leader Ricky Gallagher. Yet, as the story progresses, Olivia continues to reach out to Gabriel, and it is from Gabriel that she seeks intimacy and with whom she feels complete, settled and happy. That seems to be mutual as Gabriel and Olivia become quietly but fiercely protective of each other.

Armstrong develops the urban fantasy aspects of this series through events unfolding around Olivia's investigation into the disappearance of a local Cainsville girl, a girl who looks just like the dead body she saw in her car and coincidentally a lot like Olivia. Cainsville and the townspeople become central in Visions and the exploration into the mythological side of the series begins in earnest. Olivia's powers are no longer restricted to reading omens, and she experiences dreamlike visions when she stumbles into a mysterious empty house in Cainsville. New players are introduced as Olivia, Gabriel, and even Ricky and James get pulled into an increasingly dangerous game with both Olivia and Gabriel becoming the main targets of some powerful otherworldly beings. But how is all this related to the Larsens? And why? Clues abound in this installment if, as Gabriel says, "you just pay attention."

Visions is driven by the characters and evolving relationships: Olivia, Gabriel, Ricky, and James, and Gabriel, Olivia and Cainsville residents (Rose, Patrick, Ida, Walter, Veronica). The characters and the relationships they establish are the most compelling aspect of this novel. And it is through them that everything else comes to fruition, including the mystery that surrounds the murders and the Welsh folklore Armstrong utilizes to build the magical aspects of the urban fantasy -- omens, visions, horses, hounds, ravens, fairy circles, and more. So far, I am enjoying her modern twist on the folklore. The mystery in Visions is weaker, or let's say less complex, than the one in Omens, however, by the end Armstrong beautifully ties it to the main story arc.

Most of the novel is again narrated from Olivia's first point of view perspective, intermingled with key chapters written in the third point of view from different characters, with Gabriel's chapters providing the most interesting personal views of himself and Olivia. His character is the most attractive and mysterious of this series so far. Olivia ironically refers to herself as a "special snowflake" at one point in the narrative. Well, with Gabriel, Ricky, and James fighting for her attention (and others courting her favor), she certainly fits the description.

I hate triangles even when there is only a possibility of romance involved as is the case between Olivia and Gabriel. I simply love Gabriel's character. James is a dangerous whacko who is being influenced so he doesn't count, but the highly lusty relationship between Olivia and Ricky is surprising. Having said that, I find Armstrong portrayal of both Ricky and Gabriel as males who don't judge Olivia for her personal relationships extremely refreshing. I do wonder if that will last? And, yes, Olivia is strong, intuitive and trying to figure out who she is, but at times I find her to be somewhat immature and impulsive with a touch of arrogance.

I love the ending. There is a step forward for Gabriel. It seems like the main story arc will pick up some momentum now that we have some major players and know a bit more about Cainsville. A new character will be added to the mix and I can't wait to see how that will play out! Do I really have to wait another year for the next book? Sigh…