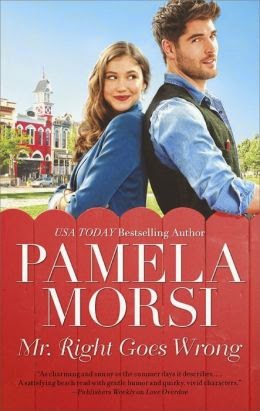 Pamela Morsi is a favorite writer whose Americana historical romances I dearly love. In Mr. Right Goes Wrong, Morsi's latest contemporary romance, she takes two people whose lives are made up of mistakes and bad choices and gives them the chance to prove to themselves and each other that change is possible.


Mazy Gulliver has been a doormat and a slave to love her entire adult life. She has chosen one wrong man after another with disastrous results. Mazy returns home with teenage son Tru to stay with her mother, determined to begin again and do right by herself and her son. Mazy's first move is to secure a job at the local bank as a loan collector working for Tad, Tru's biological father. She then visits her best friend Eli who is looking mighty fine these days. Sexual chemistry is still there between them, but Mazy is not sure Eli is for her until later when she slowly begins to believe that Eli may be her Mr. Right.

Eli Latham is the guy next door. He is sweet, nice and dependable and not Mazy's type, except when it comes to sex. Mazy is back in town and Eli's heart can't help but hope, but she is working with Tad the Cad -- does Mazy plan to get back with Tad? Eli still loves Mazy and comes to the conclusion that if she is looking for a new jerk in her life then he, Eli, is going to be her Mr. Wrong.

Morsi's Mr. Right Goes Wrong is both a romance and a personal road to wellness that encompasses both main characters, with Mazy the type of female protagonist that many readers may not like right off the bat. She has gone from one relationship to another, dragging her son Tru along the way. For a large portion of the novel as Mazy attempts to make sense of her life, she slowly turns a corner in her job but is still the clueless doormat I mention above in her newly minted relationship with Eli. She is downright pathetic at times and I admit to gnashing my teeth throughout many scenes. In Morsi's hands, however, there are reasons behind Mazy's actions as well as character growth and a good payoff at the end.

Of the two, Eli may be the most "sympathetic," at least initially. He's a fine, responsible man who loves Mazy unconditionally. Eli is also one of the most beta male characters I've encountered in a while -- caring, giving, and seriously laid back. But in his quest to win Mazy, Eli becomes as judgmental as the rest of those people he hated for hurting Mazy and goes too far. As he goes down the "beta to hard ass" road, Morsi brings Eli's character full circle and he makes a few personal discoveries of his own, not all them comfortable or pleasant.

In Mr. Right Goes Wrong, I find that the characters' journeys to personal wellness and happiness are interesting but equally frustrating. Morsi, however, has a talent for creating down to earth characters with depth and infusing subtle humor in her stories even when the issues they confront are complex. I recommend this romance to readers who appreciate Morsi’s writing style and enjoy a well earned happy ever after.