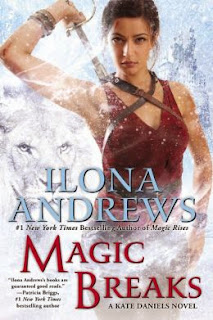 My Summary: While Curran is away on pack business Kate attends the monthly Conclave meeting with the People. All hell breaks loose when Hugh D'Ambray shows up accusing a shifter of assassinating a key member of the People and declares war on the Pack. A frantic race to discover who committed the murder and to stop the war ensues with pack members suffering terrible wounds, and ends with Kate getting caught and imprisoned by Hugh after the traitor among the pack finally comes to light. Curran comes to the rescue, however, Kate is left with no choice but to finally meet Roland face to face. Is she strong enough to defeat him? If not, what can she do in order to survive and save her friends and loved ones?

Magic Breaks takes this series in a whole new direction. This is a solid transition with a some growing pains. This installment is almost a two-part story with some abrupt transitions along the way -- the biggest one coming out of nowhere at the end. The first part is filled with the unrelenting, fast-paced action we have come to expect from the Kate Daniels series as Kate and her crew battle strange creatures, old frenemies and enemies in order to discover the identity of the assassin. The shifters in their supporting roles are, as always, a fantastic foil for Kate, both as friends and foes. The competitive relationship between Derek and Arcanio as well as the power play taking place between the wolf pack alpha Jennifer and Dessandra are notable. However, also notable in this section is how early in the story the Andrews team begin to tie up old established threads.

In what I think of as the second section, Kate and Ghastek are imprisoned in a grisly tower and Curran's character comes into play. The love between Curran and Kate continues to be beautiful and I believe it doesn't take anything away from either character, on the contrary it makes them both stronger. The action is not as relentless in this section, it is sporadic with moments left for recovery and planning, but of course there are long gruesome battles as well as confrontations with Hugh and Roland.

Hugh's character as one of the villains of this piece is memorable for embodying a few of those gray areas required of villains so they do not become over the top caricatures. He is a compelling character, although not in a sexy way -- at least not to me. Those same gray areas also apply to Roland. Roland, however, is a whole different ball of wax because although we know about his questionable intentions, he is still the big powerful mystery.

What I love most about this urban fantasy series is that Kate's character growth continues, that is most evident in her final acceptance of her true role and self. What I missed most in this installment was the fantastic mythology mystery solving that we usually get with each book. There are bits and pieces intertwined along the way, but those elements are a bit of a rehash this time around. And from the characters, I missed Aunt Bea and especially Kate and Andrea together during the action scenes.

My biggest disappointment has to be Kate's confrontation with Roland in Atlanta, particularly after all the build-up during this series. The resolution to this confrontation is foreshadowed early during the story. And while other installments are memorable for tough, action-packed, grand scale culminations, Magic Breaks ends with an over the top whimper. These observations, however, don't mean that I didn't enjoy this book, I believe Magic Breaks is a solid installment by an Andrews team that has set the bar rather high. Take into consideration that the end with Curran and Kate, yes and Julie too, is abrupt but truly intriguing. I like what it may mean for the future and can't wait to see how it plays out for the characters. Going by past history, it should be spectacular!