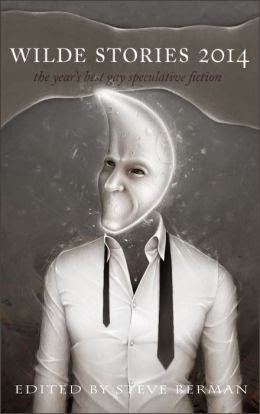 The Wilde Stories anthology series edited by Steve Berman features gay themed speculative fiction short stories published during the previous year. This year all the short works included in Steve Berman's 2014 Wilde Stories: The Year's Best Gay Speculative Fiction are written by new contributors. The collection begins with an introduction by Berman, an interesting one at that, however today I am concentrating on a long review that includes all the stories.

The anthology begins with three very good stories that quickly engage the reader, particularly with the short but highly effective contemporary piece "Grindr" by Clayton Littlewood in which text messaging, infused with edgy horror, is utilized as the spec fic element. In "The Ghosts of Emerhad" by Nghi Vo ghosts play a role in a fantasy setting with eerie atmosphere, yet it is not a chilling read, instead this is the redeeming war tale of a man coming to terms with personal loses. And with "How to Dress an American Table" by J. E. Robinson, the collection shifts to a contemporary tale with an unsettling "human monster" at its center, the kind that is often more disturbing than stories about fictional monsters hiding under the bed.

"Caress" by Eli Easton is just an excellent, complete steampunk sff romance piece filled with outstanding details, world-building and "graphic novel" atmosphere. I visualized a graphic novella while reading this romance between a young man with a clockwork heart whose genius and skills save a soldier from a fate worse than death. Following is another excellent story. "57 Reasons for the Slate Quarry Suicides" by Sam J. Miller strongly stands out with a unique format that flows effortlessly, and memorable young adult characters, outstanding speculative fiction elements, gay theme, and a plot focused on friendship, bullying, revenge and betrayal.

The collection continues the young adult theme with "Happy Birthday, Numskull" by Robert Smith, a piece that is so freaking interesting because the spec fic elements come from a sensitive, imaginative child’s perceived horrors as he experiences the adult world surrounding him. Everything changes with "Right There in Kansas City" by Casey Hannan, the only story in the anthology that veers into the realm of the weird with dense speculative fiction elements that hit the reader from its inception. There is an obvious sub-text to the story, but take it from me this one is very good and out there.

"The Water that Falls from Nowhere" by John Chu won the 2014 Hugo Award for Best Short Story. A reread, this story stands out for the subtle approach with which Chu uses rain as the speculative fiction element while the main thrust of the story is focused on a committed gay couple attempting to gain understanding and acceptance from the narrator’s traditional Chinese family. I have enjoyed Damon Shaw’s work in the past, and he did it again with "Seven Lovers and the Sea." This is a story I loved for its unique twist on both vampiric and seafaring mythical tales.

Although "The Brokenness of Summertime" by R. W. Clinger may be considered a contemporary horror tale by some or perhaps contemporary with a rather sharp edge (pun intended) after all it depicts ye ole green-eyed monster at its best, my totally warped sense of humor turned it into a highly amusing, insane, demented sort of read -- so, so enjoyable! It was then surprising that "Lacuna" by Matthew Cheney gutted me with its ending and not necessarily with the speculative fiction details. Let me explain, in this story there is a running narrative by a writer as he creates a speculative fiction piece. So, there are two stories at once, one interrupting the other's flow and ending in the writer's reality with a shocking revelation and the reasons why "words are not magic." I must be particularly susceptible at the moment because after this story I stopped reading the anthology for a bit before picking it up again. That's a good thing, it means that the story made a strong impact.

"Super Bass" by Kai Ashante Wilson is a fantastic tale with magical aspects of ancient African religions utilized as the root for the speculative fiction elements. In his story, Ashante Wilson amplifies those magical aspects within a high religious ceremony in which two lovers participate, with one transforming into the Most High Summer King and the other giving him strength through loving. The islanders traditionally marry in threes -- two men, one woman -- creating an organic same-gender, gender-mixed society. This aspect of the world-building is not deeply explored. Rather, it is an organic part of its creation and left open to the reader for further thought and speculation.

The last piece with young adults as central characters is a mythology-based story by Cory Skerry, "Midnight at the Feet of the Caryatides," that focuses on a arrogant click of students that choose to abuse the weak and different. I enjoyed the gothic atmosphere and gargoyles, but for me the most memorable aspect of the story is the combination of darkness and tenderness found in the narrative. And the anthology ends with "The Revenge of Oscar Wilde" by Sean Eads, a zombie story with Oscar playing the forceful and introspective knight avenging his lover Bosie's honor to the horrifying, bittersweet end. This is a short story worth reading for its beautiful writing and excellent alternate perspective into Wilde's last days in Paris. . . and on. "If there is a god to them now, he walks this earth and his name is Oscar Wilde."

This anthology ebbs and flows with short works that include contemporary, fantasy, steampunk, magical, and mythology-based speculative fiction – some action-filled, others quieter and more introspective, going from dark to light, and darker yet. Horror-based speculative fiction tales reign supreme with some excellent otherworldly pieces and plenty of stand outs. Personally, I found quite a few favorites as I made my way through this year's edition of Wilde Stories.