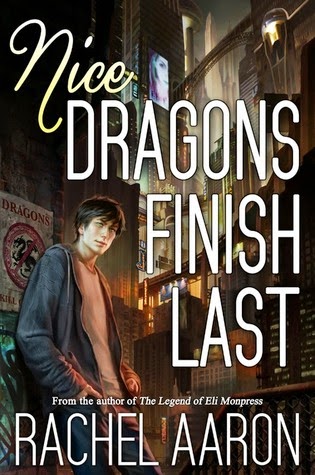 Rachel Aaron's Nice Dragons Finish Last is the first installment in her new Heartstrikers urban fantasy series. Aaron’s world-building is based on the return of magic to the world that unleashes ancient magical beings such as dragons, Algonquin, the Lady of the Lakes, and awakens human mages and powerful spirits. As the setting, the new city of Detroit works well with Aaron's world building. Created sixty years ago when the powerful Algonquin’s magic cleansed and marked it as her territory, Detroit is divided into sections with a brand new, shiny surface showing the wealth of successful corporations lying on top of a rotted old Detroit that serves as a wild and dangerous underground where crime and poverty abound, and anything goes. The city as a whole is called the DFZ or the Detroit Free Zone where crimes are committed without real repercussions and most magical beings and practices are allowed with the exception of dragons who are banned and hunted by Algonquin.

The book has a combination of great action, humor, and fun characters with an overall storyarc that only begins to emerge at the end. Julius Heartstriker is the youngest and too nice to fit in with a vast family of ambitious, manipulative dragons. His mother Bethesda the Heartstriker kicks him out without warning and seals his dragon powers, so he can prove himself worthy of the Heartstriker name. As the runt, Julius learned early to hide from his powerful siblings and their draconic power games. Now, however, he has no choice but to get involved or Bethesda has threatened to eat him. Julius accepts to perform a "simple" job for brother Ian -- he is to return a young runaway dragoness to the powerful Three Sisters dragon clan, the Heartstriker clan's bitter nemesis. He immediately gains the help of Marci, a mage just arrived at the DFZ from Vegas, and they are off on a dangerous adventure complicated by mobsters, monsters, and most of all by Julius’s own siblings.

I enjoyed the central characters -- Julius's inadequacies as a dragon and his side kick, the tougher and more worldly Marci. They make a great team. Marci has troubles of her own which Aaron ties to Julius's attempts to redeem himself, blending both threads into one action-filled plot. Note: Marci would make a better dragon than Julius -- she is ruthless, ambitious, and cunning. Love her.

The secondary characters are my favorites and their contribution to the fun and dire situations in this book made for a well-rounded urban fantasy read. Bethesda "the Broodmare" is ruthless, but then so are her children: Chelsea the Enforcer, Ian the Spoiled, Cocky, Clueless Justin, and of course my favorite, Bob (Brohomir) the Crazy Seer. They all contribute to this installment's success with a combination of manipulative ambition and a humorous hidden case of sibling care and rivalry. In other words, they are crazy beautiful.

There are familiar elements to the basis for Aaron’s urban fantasy world-building -- ancient magic returning to the world, etc. However, this is a really fun read and I believe it is a solid introduction to what promises to be an enjoyable series. Additionally, I love Detroit as the setting, as well as the dragons as central characters – contemporary, technically savvy dragons who also hold on to ancient lore and traditions. Romance? There is a hint of romance with a promise of more to come. Nice Dragons Finish Last does not come close to urban fantasy perfection, but you know what? I had lots of fun reading it and I am hooked! Grade B
Posted by Hilcia at 1:16 PM