Review: The Girls at The Kingfisher Club by Genevieve Valentine 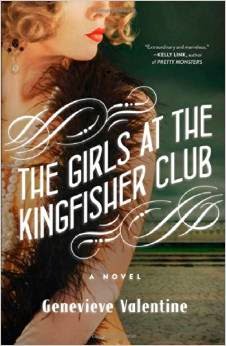 I so enjoyed this book! Flappers, bootleggers, speakeasies, drinking, dancing, cross-starred lovers, and a villainous father!


"Jo guessed even then that Mother's purpose was to have a son, and she was kept from all other causes. Them included."

The Girls at the Kingfisher Club is based on The Twelve Dancing Princesses fairy tale but this is not a fantasy piece, it is strictly fiction set in 1920's Manhattan. The story loosely follows the same structure as the fairy tale with twelve sisters born to a wealthy Mr. Hamilton who kept his wife pregnant in the hopes of having a son to carry on the Hamilton name until the wife died. He confines his twelve daughters to the second floor and attic severely neglecting them. The girls' one and only outlet is dancing. The four eldest daughters, Jo the "general," vivacious Lou, gorgeous Ella, and down-to-earth Doris sneak out at night and hit the Manhattan speakeasies at age fourteen until they find a home at The Kingfisher Club. After that, as the rest of the girls come of age and under Jo’s watchful eye, they dance their nights away at the only place where they feel safe and taste precious moments of freedom.


“The girls were wild for dancing, and nothing else. No hearts beat underneath those thin, bright dresses. They laughed like glass.“

I love how well Valentine integrates the fairy tale and her own version with the Hamilton daughters as 1920's flappers. It is a great story with a controlling father as the ultimate misogynist who attempts to sell his daughters to men like himself as a solution to financial troubles, and how his daughters outwit him and make their way in a world they don't recognize by daylight.


“The girls could hope that these husbands, wherever her father planned to find them, would be kinder and more liberal men than he was. But the sort of man who wanted a girl who’d never been out in the world was the sort whose wife would stay at home in bed and try to produce heirs until she died of it.“

There is a romance of sorts between the eldest daughter Jo and bootlegger turned club owner Tom, but Jo emerges as the mistress of her own destiny and throughout and to the end controls her own happiness.


"You can't expect people to give you the things you love, unless you know how to ask."

Of the sisters, Jo is the best developed character with Lou, Doris, and Ella following in importance. The rest of the sisters are sometimes distinguishable only by the dances they prefer or key characteristics. Of the secondary characters, Mr. Hamilton, Tom, and Jake, The Kingfisher Club's bartender and loyal friend make the greatest impact.

There is a certain awkwardness to the writing style or structure as a result of long paragraphs containing thoughts or commentary placed between parentheses. Although after a while I became used to this ongoing style, there was always an awareness at the back of my mind that interrupted the reading flow throughout the novel. However, the story itself is engaging and a quick read with excellent Roaring Twenties atmosphere and gritty details of Manhattan's underground speakeasies as the setting. The descriptions of dancing in seedy or glamorous clubs are gorgeous. The heartbreaking moments, Jo's sacrifices for her sisters, the sisters' escape from captivity into the real world, and the final payoff, all make for a magnificent tale by Valentine.


“She was still trying to discover how people related to each other, and how you met the world when you weren’t trying to hide something from someone. It was a lesson slow in coming.“