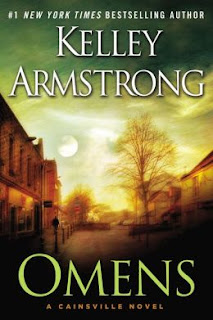 Omens is the first book in Kelley Armstrong's brand new, urban fantasy series, Cainsville. I am not familiar with Kelley Armstrong's works, so I have no base of comparison when it comes to her writing style or other series. In this case, I'm glad that I'm beginning with a clean slate and reviewing this book on its own merit instead of comparing it to Ms. Armstrong's previous successes. So lets get this out of the way right now, Ms. Armstrong writes in a clear, concise, crisp style that I absolutely loved. I'm so glad I finally decided to pick up one of her books.

Omens begins with a hook. The prologue is uncommon in that it is narrated from the point of view of a 2 1/2 year old little girl. It begins in such a way that the reader doesn't know whether she is in danger or not. Then the reader is pulled into a beautiful happy moment only to be yanked into a terrifying moment of loss and pain. That short beginning is a roller-coaster and a little taste of what is to come.

Moving forward, the story shifts to Olivia Taylor-Jones, a 30 year-old wealthy heiress whose life consists of volunteering at the family's sponsored charity, writing speeches for her politically ambitious fiancée James Morgan, and taking care of her self-centered widowed mother. Olivia's life is turned upside down when out of the blue she finds out that she is adopted and that her biological parents are the most notorious serial killers known in Chicago's recent history, Todd and Pamela Larsen, making her real name Eden Larsen. The story begins to take a dark turn when overwhelmed by the paparazzi, feeling emotionally and physically rejected by her loved ones, angry and reeling from the news, Olivia takes off on her own only to find herself unable to find a job or a place to stay. After doing a good deed, she finally finds affordable housing and a job at the diner in a weird little town called Cainsville.

The above is very important to the story, particularly the feelings of rejection from her adoptive mother and fiancée, because it sets up the reasons behind Olivia's reactions throughout the rest of this story and I'm sure for what is to come later on in the series. But frankly for me, the story really takes off once Olivia arrives in the weird little town of Cainsville, with its elderly population and hundreds of stone gargoyles seemingly guarding the place. This is where Olivia meets Gabriel Walsh, nephew to the local psychic and coincidentally the unscrupulous attorney who represented Pamela Larsen during her appeal. Olivia also meets the other peculiar residents of Cainsville. People who don't seem to be surprised or taken aback when Olivia sees omens and predicts possible events based on them.

I am quite impressed with Omens. In fact, I read it twice before writing this review because it left me with such an unsettled feeling and sense of foreboding that I had to get back to it to find out exactly what it was about it that generated that feeling. See, Omens reads like a mystery suspense with Olivia hiring Gabriel to help her investigate the events that lead to the gruesome murders supposedly committed by her parents. There are paranormal elements introduced in this first book, but it is a subtle introduction that is really well integrated with the mystery suspense plot. There is, however, a suppressed sense of foreboding throughout the whole story that makes for a heavy atmosphere. It a kind of... waiting. The stepping stones are there to build the fantasy side of this series as Armstrong combines the strong ties found to Fae Welsh mythology in Cainsville with science and a slight edge of horror and violence found in Chicago as the urban setting.

Olivia/Liv/Eden has a marvelous narrative voice that gets better as the story progresses -- particularly when she's engaged in dialog with Gabriel. There is a case of nurture vs. nature going on with her personality. There is character growth for Olivia within this story alone. I can only imagine how much more growing there will be for her in the future and cannot wait to see how far Armstrong takes this woman who is just discovering who she really is, and what she may be capable of doing. I'm particularly curious about her fledgling omen-interpreting powers and how far she can go with them. You'll have to read the book to find out how omens work and how Olivia is connected to them.

Most of the story is told from Olivia's point of view, but there are single, short chapters peppered throughout the book narrated from different characters' points of view, including Gabriel. I like that. In some instances these chapters give the reader insight into how Olivia is viewed by others, in others they give clues as to events that are going on, but also important is the fact that through them, the reader gains an insight into Gabriel's personality. He is a key character. Gabriel is a frustrating, acquisitive asshole protective of himself first and always, but he is also mysterious, fascinating, and a man worth knowing. He is not a seductive man though... in fact, he seems awkward when it comes to that. A bit of a contradiction all around, and one with good potential primarily because the man has vulnerabilities even if at this point they seem to be few. Olivia, thank goodness, has his number, knows just how to deal with the man, and called him on his bullshit too. I am pretty sure that is the one reason Gabriel and Olivia's relationship worked for me.

The plot in Omens gains momentum as it progresses. There are violent deaths, ominous moments that lead to that sense of foreboding I mentioned above, and a tad of horror borrowed here and there that give the plot an edgy feel, all balanced by the light humor provided by Olivia's excellent narrative voice. Armstrong begins the series with a subtle construction of her world, but weaves in so many complex threads in this first book that by the end there are questions upon questions that need answers. There is a satisfying conclusion to Omens, but there is so much more to come that it left me panting for more. More Olivia, more Gabriel, more Cainsville, more suspense.

Visit Kelley Armstrong here.
Posted by Hilcia at 11:53 AM