Guest Author Tim Z. Hernandez: "I Remain as Ever, Bea" 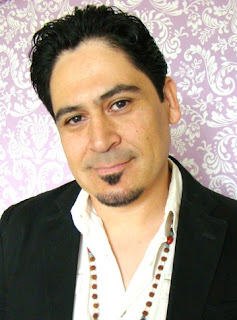 Today, I would like to extend a big welcome to Tim Z. Hernandez, author of Mañana Means Heaven, the story of Bea Franco who for years was only known as Terry, the "Mexican girl" from Jack Karouac's On the Road.


Mañana Means Heaven deftly combines fact and fiction to pull back the veil on one of literature’s most mysterious and evocative characters. Inspired by Franco’s love letters to Kerouac and Hernandez’s interviews with Franco, now in her nineties and living in relative obscurity, the novel brings this lost gem of a story out of the shadows and into the spotlight.

Franco was sought out by dozens of Kerouac and Beat scholars, but none could find her. According to one, “finding Bea Franco is like trying to find the ghost of a needle in haystack.”

Well, Tim Z. Hernandez found the "needle in the haystack" and wrote a book that has received high praise from The Associated Press, Booklist and others, and that I am sure will continue to do so.

On a personal note, when The University of Arizona Press contacted me about the upcoming release of Mañana Means Heaven I was immediately taken in by the synopsis. It just captures the imagination. Later, as I was in the middle of reading Bea Franco's journey through life, I was quite shocked and saddened to learn that she had passed away.

Today is the last day in a week-long blog tour. By following the tour, you will find real insight into Tim's research by listening to interviews, reading notes from his journal, excellent question and answer sessions, or if you prefer, there are also book excerpts available.

For his last stop today, however, Hernandez chose to write a very personal post about Bea.


I Remain as Ever, Bea

On the morning of August 15, 2013 I received a text from Albert Franco, Bea's son, telling me in only a few abbreviated words that his mother had passed away. This news took the breath out of me. It was unexpected, to say the least. I had just recently spoken with Patricia, Bea's daughter, who Bea had been staying with in Long Beach. My family and I were making plans to see her while we were going to be in California. At the time, Patricia said something to the effect of, "My mother's been doing much better lately and I'm sure she'd like to see you." So my wife and I began planning. Just a few days earlier, on August 3, after receiving copies of my book in the mail from my publisher, I hurried to the post office and sent Bea a package, which included a signed copy of the book, her book, along with a bound photo album I had made her, compiled with all the photos and documents her family had loaned me during the writing of her book. Days later Patricia called to tell me the package had arrived and how excited they all were. I asked if she wouldn' t mind taking a few pictures of Bea holding her book, and she agreed. On August 7, I received several text messages from Patricia's daughter Dina, images of Bea smiling with her copy of Mañana Means Heaven in her hands. She had that same curious glint in her eye that I had come to know, as if to say, it's about time! Of course, in that moment we had no idea that these photographs would become the only evidence that Bea did in fact live to see her life story told in the pages of a book. No longer merely the fictional "Mexican girl" of Kerouac's imagination, or the quiet and unassuming campesina that appeared for all of two minutes in Walter Salles' movie, On the Road, but Beatrice Renteria Franco, now Bea Kozera, the real woman, the real deal.


On the very day Mañana Means Heaven was to land on the shelves of bookstores across the nation, Thursday August 29, a handful of friends and family gathered at the idyllic Belmont Memorial Park in Fresno, California to pay their last respects to this "petite woman with fire in her heart," as one of Bea's relatives remarked. For the better part of three years, it seemed every member of my family was also invested in Bea's story. (It was my mother who actually located her whereabouts back in 2010. After telling her I was about to give up my search for Bea and just get on with the book, she replied, "Give me your files and notes, I'll find her!" 24 hours later, she handed me two possible leads.) Even my cousin Art, when I went to visit him in the pen the first thing out of his mouth was, "Have you finished your book about the Mexican girl?" And of course, so many times my wife Dayanna had watched me return from my interviews with Bea beaming with excitement. Like this, my family, even our children, became familiar with Bea; through our visits with her, through the myriad photos which hung on the wall above my desk as I wrote the book, through the sound of Bea's own tender voice played back on my video camera, for three solid years we lived with her presence. Needless to say, at her services, we were all there together. I was asked by her son Albert to share a few words, and so I spoke briefly about what Bea had taught me, and about what we might all learn from her story. That each of us, regardless of how seemingly insignificant or boring or obscure our lives may be, are made up of valuable epic stories that deserve their day in the light. Standing at the podium, I concluded my thoughts by sharing one small but very cool detail about Bea. Over the years she had enjoyed writing letters and postcards to people, and she had a distinct way of signing off. I could clearly see that curious glint in her eye shine, each time she assured her reader, "I Remain as Ever, Bea." 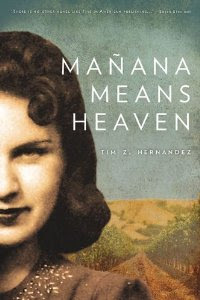 About the Author: Tim Z. Hernandez is a poet, novelist, and performance artist whose awards include the 2006 American Book Award, the 2010 Premio Aztlan Prize in Fiction, and the James Duval Phelan Award from the San Francisco Foundation. He is the author of two books of poetry, Natural Takeover of Small Things (2013) and Skin Tax, and the novels Mañana Means Heaven (2013) and Breathing in Dust. In 2011 the Poetry Society of America named him one of sixteen New American Poets. He holds a BA from Naropa University and an MFA from Bennington College.