The Ocean at the End of the Lane by Neil Gaiman 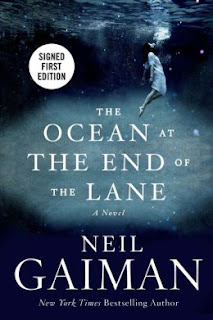 Sussex, England. A middle-aged man returns to his childhood home to attend a funeral. Although the house he lived in is long gone, he is drawn to the farm at the end of the road, where, when he was seven, he encountered a most remarkable girl, Lettie Hempstock, and her mother and grandmother. He hasn't thought of Lettie in decades, and yet as he sits by the pond (a pond that she'd claimed was an ocean) behind the ramshackle old farmhouse, the unremembered past comes flooding back. And it is a past too strange, too frightening, too dangerous to have happened to anyone, let alone a small boy.

Forty years earlier, a man committed suicide in a stolen car at this farm at the end of the road. Like a fuse on a firework, his death lit a touchpaper and resonated in unimaginable ways. The darkness was unleashed, something scary and thoroughly incomprehensible to a little boy. And Lettie—magical, comforting, wise beyond her years—promised to protect him, no matter what.

A dark fairy tale for adults, The Ocean at the End of the Lane is a short piece by Neil Gaiman that nevertheless leaves the reader thinking hard about those childhood memories we all take for granted. Gaiman infuses this fairy tale with magic, realism, and enough terror to make an adult tremble, never mind a child.

The magical aspects of this fairy tale are gorgeous, absorbing and scary: there is an Oracle-like trio of women who live at the end of the lane from the boy's home, at a place called the Hempstock's farmhouse -- the crone, the mother, the maiden -- or Old Mrs. Hempstock, Ginnie Hempstock (Lettie's mother), and eleven year-old Lettie who becomes the boy's friend and protector. Oh, Lettie and the boy visit a magical and dangerous place with an orange sky and the farmhouse is warm and safe with a a magical pond, a beautiful kitten, delicious pies, cream and milk where he finds a deep, abiding friendship. But, don't be deceived because there are also terrifying monsters, danger, betrayal, loss, and the question of survival.

Gaiman's fairy tale is narrated by a seven year-old boy as events are remembered by the man he becomes. It's interesting because we all know how childhood memories can fade and events can become distorted with time and our narrator is middle aged -- divorced with grown children with established lives of their own. Magic, however, factors into the "distortion of memory" issue, which I believe is a creative approach by Gaiman.

Children often blame themselves for what happens around them, to them, to their parents, as a result of their actions, but most times through no fault of their own. They can also erase and/or rearrange memories, particularly bad ones, to fit their lives and make them more acceptable. In Gaiman's fairy tale, the unnamed protagonist placed those memories in a tight little box and closed the lid. The memories only came into play when he went through changes in his life, but were those memories accurate or was he still placing the blame where it did not belong? After the funeral when our story begins, are the memories closer to being accurate? This adult fairy tale is a magnificent way of telling a story that deals with the consequences of childhood trauma and factors in memory.

The summary of the book above is quite accurate in detail, but lacks spoilers. It is in fact the perfect summary for this short novel by Gaiman. However, it would help to clarify that forty years earlier means 1960, and that has to be kept in mind when reading the seven year-old boy's narrative, particularly his feelings about adults and his reactions to them.

As terrifyingly beautiful and creative as the fairy tale turns out to be, this story is about growing up. There is little subtlety in the way Gaiman portrays the death of innocence or the depth of terror or fear felt by the boy as he narrates his experiences. But there is no question that I wouldn't have missed walking in the boy's shoes or missing out in those experiences.

I think what I love about The Ocean at the End of the Lane is that it can be read and enjoyed in different ways, as a magical fairy tale or as more. Although it has children as protagonists at its core and family is part of the story, this is not a warm, children's fairy tale like The Graveyard Book. It has a much darker atmosphere, and deeper and much more complex plot that makes this an adult fairy tale. This is my interpretation of what I found at the core of the fairy tale. I'm sure we all have different thoughts about it... and of course, that is the beauty that comes from reading this piece by Gaiman.  Highly recommended.
----------
Favorite quote: