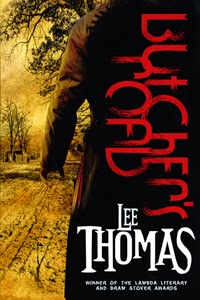 Butcher's Road is an atmospheric mystery thriller with supernatural elements, set in the violent 1932 gangster-ruled streets of Chicago and the spiritual world of a rainy New Orleans.

The story revolves around Butch Cardinal whose lifetime decisions led him from success on the wrestling mats to working as enforcer and errand boy for a Chicago Irish mobster. Unfortunately for Butch, he is sent to pick up a package from an Impellitari henchman and ends up smack in the middle of a hit. Butch escapes with the package and is framed for the murder, becoming a haunted man and the target of Italian Chicago mob-boss Marco Impellitari, dirty Chicago cops, a psychopath hit man, and the Alchemi, a secret organization of powerful magicians who collect, utilize, and protect arcane artifacts composed of "thinking" steel. With help from friend and ex-coach Rory Sullivan, Butch flees to New Orleans where he discovers that the ugly necklace in the package is an old mythical relic, and unexpectedly finds refuge in the arms of ex-wrestler and club owner Hollis Rossington.

Butcher's Road has been described as a "blend of gangster noir and supernatural horror." I agree. The story is dark. Lee Thomas incorporates the deep sense of hopelessness permeating the 1930's into plot, characterization, and atmosphere. His Chicago gangsters are unsophisticated, non-charismatic and resort to bloody violence without a second thought, and neither gangsters nor cops are glamorized in this novel. This is best exemplified by Thomas's characterization of Detective Curt Conrad whose portrayal as a physically and personally repulsive self-serving man without an iota of scruples symbolizes the police department's corruption in all its glory. Contrasting heavily is Thomas’s subtle characterization of Detective Lennon as an ambivalent man whose bouts of conscience make him a no-less self-serving or corrupt cop.

The supernatural aspects of the story are well established. Serving as an introduction to this theme, Thomas utilizes Butch's search for the truth surrounding the object he unwittingly possesses, leading to the discovery of magical objects and personal mystical powers, while further expanding on this theme with more explicit, if somewhat obscure, revelations through the Alchemi's hot pursuit and eventual contact with Butch.

While the occult plays a key, central role throughout and to end of this thriller, for me, it is Thomas' masterful portrayal of the incremental escalation and eventual loss of control of psychopathic killer Paul Rabin that provides the real horror. Rabin's role begins with a whisper in what seems like an innocuous scene, slowly progressing with coldly executed blood-letting, and escalating until all that is left are the amped-up internal screams of an out-of-control killer and the horror-filled vicious scenes he leaves behind.

Thomas portrays Butch as an honest man who never learns to play the "game" and whose harsh life lessons, beginning with an abusive father and ending with a fixed match that led to his present situation, taught him not to expect a fair fight. The odds are against Butch's survival and he becomes resigned to losing, but what I love most about him is his refusal to go down without a fight. His relationship with Hollis is unexpected, specifically because Butch is initially shocked by proof of Hollis's sexuality and tells him so with frankness. However while hiding at Hollis's home, Butch remembers past experiences that trigger a growing sexual attraction for Hollis, a giving man he already likes and respects. Eventually Butch makes the first move, beginning what becomes a peaceful, joyful period for both men.

Butcher's Road by Lee Thomas has a relentless quick-pace with the few moments of allowed reprieve filled with relevant information used to drive the story forward. It is an exciting thriller -- darkly violent and bloody -- that offers highly effective contrasts between warm and horrifyingly chilling moments and a surprising twist at the end. Highly recommended.

Other recommended reads by Lee Thomas:
The German
Torn
Posted by Hilcia at 4:32 PM