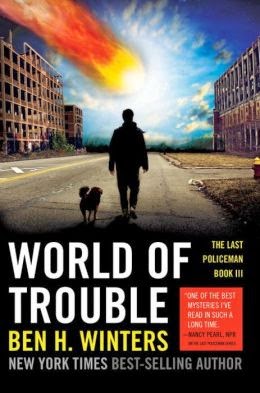 World of Trouble is the conclusion, and the most personal and passionate installment, of Ben H. Winters' pre-apocalyptic mystery trilogy The Last Policeman.

There are fourteen days left before Maia, the asteroid known as 2011GV₁, collides with Earth on October 3rd. Chaos and fear reign as some people panic, losing control, while others brace for the worst and hope for the best. Some are barricaded in basements or holes in the ground, last minute suicides abound, and yet others kill and hoard goods in order to survive whatever may come. Money is worthless, but water, food, gasoline, and guns, are priceless.

Detective Hank Palace gave up the relative safety of Police House in Massachusetts to search for his sister Nico. Hank last saw her in July after she saved his life. He can't forgive himself for letting her go with a dangerously radical group and not keeping his promise to keep her safe. Hank's search takes him on a road trip to a deserted police station in Ohio where he finds evidence of a brutal crime and Nico's presence. As the countdown to October 3rd begins, it leaves him little time and desperate to solve one last, very personal, case.

The focus and attention to detail makes World of Trouble an outstanding mystery read. I don't want to spoil the mystery by summarizing the entire story, but I will give you this much, World of Trouble is not a stand alone and it is imperative that Countdown City be read beforehand as details from that novel become key to Hank's search for Nico and to solving a final case filled with twists and unexpected turns. However, as in the first two books of this trilogy, Hank Palace's character is the real draw.

With the imminent destruction of the world at their doorstep, to most friends and the people Hank encounters throughout his investigation, he appears as nothing more than a quixotic character wasting his time. But we all know that Hank cares deeply, and that gathering information, getting the answers, and solving the mystery, also allow him to process fear, grief, loses, brief periods of joy and an acceptance that serves as a respite from the chaos surrounding him.

Winters achieves this marvelous characterization by personalizing Hank's cases throughout the trilogy and tightly weaving them with his well established pre-apocalyptic world building. In a World of Trouble, Winters combines the tight timeline with Hank's strict methodology and his emotional investment in the case to build and maintain a thrum of tension felt throughout the whole installment.

How far would you go to protect a loved one? And how would you choose to spend your last days on Earth? The answers to those questions represent the final central theme for World of Trouble through Hank's search for his sister, and as the end approaches, through his experiences with other characters, and to the fantastic end of this trilogy.

The Last Policeman trilogy is an excellent fusion of science fiction and mystery. Its effectiveness is derived from Ben H. Winters' creation of a pseudo contemporary setting that gives the overall story arc plausibility, and a central character that comes to symbolize human civilization by asking the tough questions even at the end of times. Highly recommended.