Summer Reading: Land of Love and Drowning by Tiphanie Yanique 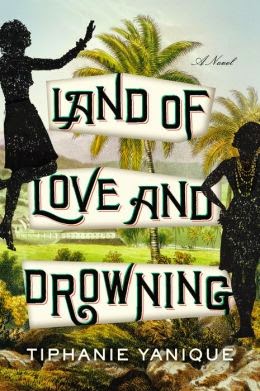 I think of Land of Love and Drowning as Tiphanie Yanique's magical-realism version of the U.S. Virgin Islands' history as told through the tangled lives of three generations of one family beginning with the trade between the Danish and Americans on March 31, 1917 and ending approximately in 1970.

Land of Love and Drowning may be read from two perspectives: as a multi-generational novel with a deeply disturbing subject matter at its core and magical elements taken from cultural folklore, or as a magical realism piece in the style of Gabriel Garcia Marquez's One Hundred Years of Solitude where characters and generations symbolize the historical and cultural struggles of a continent, or as is the case in Land of Love and Drowning, the annexed U.S. Virgin Islands.


"The people who had come together to make Captain Owen Arthur Bradshaw could be traced back to West Africans forced to the islands as slaves and West Africans who came over free to offer their services as goldsmiths. Back to European men who were kicked out of Europe as criminals and to European women of aristocratic blood who sailed to the islands for adventure. Back to Asians who came as servants and planned to return to their Indies, and to Asians who only wanted to see if there was indeed a western side of the Indies. And to Caribs who sat quietly making baskets in the countryside, plotting ways to kill all the rest and take back the land their God had granted them for a millennium."


Eeona Bradshaw, the eldest daughter of Captain Owen Arthur and Antoinette Bradshaw, is part of a pre-trade generation that comes to symbolize the old class-conscious, pre-American Virgin Islands. Ambitious but with a lack of vision, Eeona seeks freedom by clinging to an old way of life that erodes beauty and magic through resentment, hatred, and contempt of anything that reflects change. Still beautiful, but diminished and always arrogant, she idolizes a flawed past and attempts to preserve it by keeping its secrets and hiding the truth to disastrous effects. In the story, Eeona’s father Captain Owen Arthur with whom she becomes obsessed, and her mother Antoinette from whom she inherits her blind ambition represent the past.

Owen Arthur's bastard son Jacob exposes prejudices and racism, laying open America's true views and feelings toward the islanders during the American South's Jim Crow era. But Jacob, limited by fear and cowardice loses both love and magic by surrendering his true identity and becoming what he detests in exchange for success and acceptance. Jacob grows up as a McKenzie, a wealthy and well-known island family. Although he knows the truth about his identity, Jacob refuses to acknowledge it until it is too late.

Owen Arthur's youngest daughter Anette belongs to the post-trade generation. Proud of her Virgin Island roots, her narrative is entirely in the "Caribbean language tourist guidebooks will call Creole." Anette symbolizes the true spirit of the islands -- vibrant, open, loving, big hearted, magical, ambivalent, proud and ruthless. She is blinded by love and blindsided and deceived by family secrets, just as holding an incomplete view of its rich and flawed history blindsided and deceived a whole generation of islanders to the reality of their American status after the trade. She becomes the mother of future revolutionaries, islanders returning to their cultural roots, as well as to those who leave the shores and their hearts behind.

At the back of the book Yanique explains that some of the island's history used to create this novel was gathered from her grandmother, she also used her family's background to create some of the characters, and while some events are true to history the rest falls under fiction. The folklore or "magical stories" such as the Duenes are fiction and magic, while the "obeah" tradition comes from West African religions and can be found throughout the Caribbean, albeit under different names.

Yanique's female characters are well defined and central both to the story and as symbols in the magical realism aspect of this tale with male characters taking a backseat or weaker roles, but serving as a strong influence throughout both. Throughout the novel, the author uses heavy foreshadowing at the beginning of chapters or sections (sometimes throughout the narrative) and then develops the story until it comes to the expected conclusion. I found this technique intriguing but not always effective. The writing and descriptions of St. Thomas and Anegada are lovely, but what I enjoyed the most is how well characterization is tied to the historical fiction and magical realism aspects of the story. I found Yanique's characters to be as vibrant and complex as the mixture of cultures and antecedents that make up the U.S. Virgin Islands' population and as beautiful and magical as its nature and folklore.

This is a strong debut novel and one I recommend to readers who enjoy this style of magical story telling, however also take into consideration that disturbing subject matter/taboo relationships are central to the overall story. Grade B