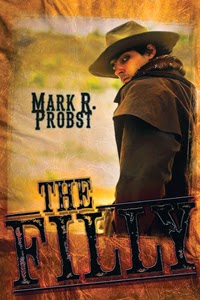 Mark R. Probst's The Filly is an LGBT young adult historical western romance. Probst captures the textured atmosphere and characterization found in traditional vintage westerns by focusing on a naive young man as he first experiences the beauty and dangers of the West. These firsthand experiences are later complicated by his growing attraction for a close buddy and existing prejudices and laws of the times.

The novel is divided into three sections beginning with The Cowboy which features seventeen-year-old Ethan Keller's life in a small Texas town. Ethan has two passions: books and horses. The books he borrows from the town’s teacher and resident spinster Ms. Peet with whom he shares a passion for literature. The horses he visits on his way home from his job as a clerk at the general store, but his dream is to own a beautiful horse one day. Life changes for Ethan after he meets Travis Cain, an itinerant young cowboy looking to work in the area. Travis befriends Ethan by allowing him to ride his gorgeous mare and eventually talks Ethan into signing up and going along with him on a 900-mile cattle drive.

In the second section, The Drive, Probst's novel really shines with detailed beauty and western atmosphere as young Ethan and Travis travel through plains, rivers, mountains and desert, encounter dangers and even death on the way to their final destination. During this time, Ethan discovers he feels more than friendship for Travis who obviously returns his feelings. Also notable in this section is Probst's execution of the tender, warm and loving romantic scenes, as well as the budding relationship between Travis and Ethan. Conversations during intimate interactions help Ethan understand his feelings, but also serve as cautionary foreshadowing of what is to come.

As the drive ends, Ethan and Travis make plans for a future together, but first they make their way home to prepare for a new journey. And so the third section, San Antone, begins. Travis and Ethan are met by heavy complications and events take a grim turn as they unfold. This section contrasts heavily with both The Cowboy and The Drive where the expectation and actualization of adventure and love drive the story. Probst introduces new characters with a few from the previous two sections returning to round up his cast of key secondary characters. Of those, Ms. Peet and Ethan's brother Willie are particularly notable to end. As things turn out, anachronistic thinking drives events to a certain conclusion. However, those events contribute to the happy ending expected of a romance. It is not a forced happiness, instead it is one that makes sense and works well within the context of this historical western.

I love my westerns and The Filly by Mark R. Probst fits perfectly in that category. It offers the small western town atmosphere and grandeur of the old American West, small town conflicts and the spirit of great adventure, but at its core this story is about truth, honor, prejudice, loyalty, friendship, and love. The Filly is a grand adventure and a solid contribution, perfect for LGBT young adults.


*Note: The Filly was first released in 2007 by Cheyenne Publishing. It was rereleased in print by Lethe Press on July 1, 2014. It is also available in both audio and in ebook formats.