There are so many books I would love to read this summer! Some I've already pre-ordered, others are already in my possession, but I always keep a list of books in my "wish list." Of those, I usually end up reading at least half throughout any given year. From that list, I've chosen the ten SF/F, UF, and contemporary fiction books that I'm most likely to read from the July and August 2014 releases. 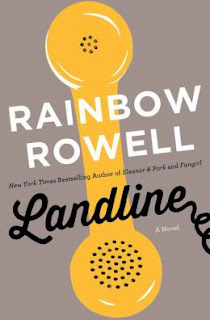 Georgie McCool knows her marriage is in trouble. She still loves her husband, Neal, and Neal still loves her. Two days before they’re supposed to visit Neal’s family in Omaha for Christmas, Georgie tells Neal that she can’t go. She’s a TV writer, and something’s come up on her show; she has to stay in Los Angeles. Georgie doesn’t expect him to pack up the kids and go home without her.

When her husband and the kids leave for the airport, Georgie wonders if she’s finally ruined everything. Georgie discovers a way to communicate with Neal in the past. It’s not time travel, exactly. She feels like she’s been given an opportunity to fix her marriage before it starts. Is that what she’s supposed to do? Would Georgie and Neal be better off if their marriage never happened?

Land of Love and Drowning: A Novel by Tiphanie Yanique (Fantasy, Riverhead) 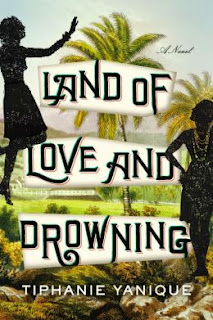 In the early 1900s, the Virgin Islands are transferred from Danish to American rule, and an important ship sinks into the Caribbean Sea. Orphaned by the shipwreck are two sisters and their half brother. Each of them is unusually beautiful, and each is in possession of a particular magic that will either sink or save them.

Chronicling three generations of an island family from 1916 to the 1970s, this is a novel of love and magic set against the emergence of Saint Thomas into the modern world. The story is told in a language and rhythm that evoke an entire world and way of life and love. Following the Bradshaw family through sixty years of fathers and daughters, mothers and sons, love affairs, curses, magical gifts, loyalties, births, deaths, and triumphs. 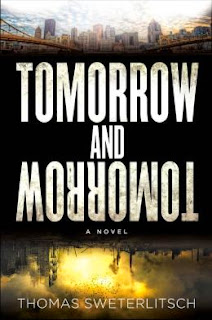 A decade has passed since the city of Pittsburgh was reduced to ash. Survivor John Dominic Blaxton remains obsessed with the past. Grieving for his wife and unborn child who perished in the blast, Dominic relives his lost life by immersing in the Archive, a fully interactive digital reconstruction of Pittsburgh. Dominic investigates deaths recorded in the Archive to help close cases long since grown cold.When he discovers glitches in the code surrounding a crime scene, the body of a beautiful woman abandoned in a muddy park that he’s convinced someone tried to delete from the Archive, his cycle of grief is shattered. Dominic tracks the murder through a web of deceit that takes him from the darkest corners of the Archive to the ruins of the city itself, leading him into the heart of a nightmare more horrific than anything he could have imagined. 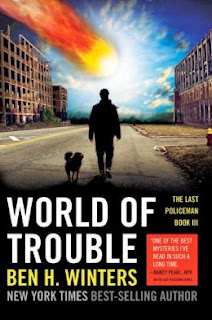 With the doomsday asteroid looming, Detective Hank Palace has found sanctuary in the woods of New England, secure in a well-stocked safe house with other onetime members of the Concord police force. But with time ticking away before the asteroid makes landfall, Hank’s safety is only relative, and his only relative—his sister Nico—isn’t safe.

Soon, it’s clear that there’s more than one earth-shattering revelation on the horizon, and it’s up to Hank to solve the puzzle before time runs out . . . for everyone. 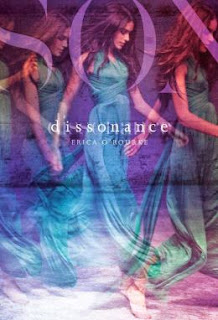 Delancy Sullivan has always known there’s more to reality than what people see. Every time someone makes a choice, a new, parallel world branches off from the existing one. As a Walker, someone who can navigate between these worlds, Del’s job is to keep all of the dimensions in harmony. Del can hear the dissonant frequency that each world emits as clear as a bell. When a training session in an off-key world goes horribly wrong, she is forbidden from Walking by the Council. She secretly starts to investigate these other worlds. Something strange is connecting them and it’s not just her random encounters with echo versions of the guy she likes, Simon Lane.

As she begins to fall for the Echo Simons in each world, she draws closer to a truth that the Council of Walkers is trying to hide, a secret that threatens the fate of the entire multiverse. 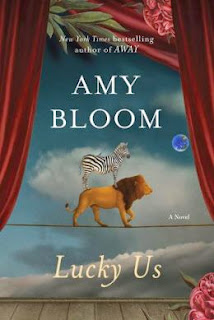 “My father’s wife died. My mother said we should drive down to his place and see what might be in it for us.”

So begins this remarkable novel by Amy Bloom, whose critically acclaimed Away was called “a literary triumph” (The New York Times). Lucky Us is a brilliantly written, deeply moving, fantastically funny novel of love, heartbreak, and luck.

Disappointed by their families, Iris, the hopeful star and Eva the sidekick, journey through 1940s America in search of fame and fortune. Iris’s ambitions take the pair across the America of Reinvention in a stolen station wagon, from small-town Ohio to an unexpected and sensuous Hollywood, and to the jazz clubs and golden mansions of Long Island.

With their friends in high and low places, Iris and Eva stumble and shine though a landscape of big dreams, scandals, betrayals, and war. Filled with gorgeous writing, memorable characters, and surprising events, Lucky Us is a thrilling and resonant novel about success and failure, good luck and bad, the creation of a family, and the pleasures and inevitable perils of family life, conventional and otherwise. From Brooklyn’s beauty parlors to London’s West End, a group of unforgettable people love, lie, cheat and survive in this story of our fragile, absurd, heroic species. 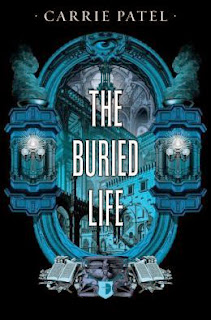 The gaslight and shadows of the underground city of Recoletta hide secrets and lies.

When Inspector Liesl Malone investigates the murder of a renowned historian, she finds herself stonewalled by the all-powerful Directorate of Preservation – Recoletta’s top-secret historical research facility.

When a second high-profile murder threatens the very fabric of city society, Malone and her rookie partner Rafe Sundar must tread carefully, lest they fall victim to not only the criminals they seek, but the government which purports to protect them. Knowledge is power, and power must be preserved at all costs… 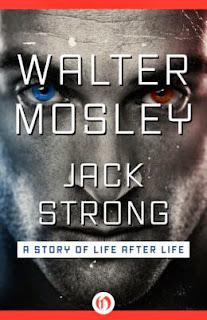 In a Las Vegas hotel room, a man awakes to confront his destiny

Dreaming, Jack hears voices: a frightened child in a hospital, a woman cheating on her husband, a death-row inmate. When he wakes, the voices recede, but they do not vanish. He is in a luxurious hotel room on the Vegas strip, and his body is covered in scars. Jack Strong is a patchwork man, his flesh melded together from dozens of men and women, and his mind is the same way. Countless lifetimes are contained within him: people whose time was cut short, and who see their place in Jack as a chance to make things right.

On behalf of one of them, Jack reignites a feud with corrupt casino bosses. Drawing on the skills of another, he beats the life out of two bodyguards. Jack fights for control as he lurches from impulse to impulse, certain that somewhere within him exists a soul. The answers may lie with whomever is tailing him in a sleek black car—if Jack can somehow confront him. 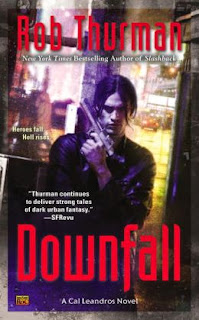 I let it go—all of it. Everything I’d been saving up all my life, building and growing inside me, too much to hold in one half-human body. It pushed and fought to be free with a force that turned me into a bomb with a timer vibrating on zero. I was free.

But so was everything I’d fought so hard not to be....

Brothers Cal and Niko Leandros know trouble when they see it—and then proceed to wipe the floor with it. But now it seems their whole world is falling to pieces. Cal’s nightmarish monster side is growing ever stronger, changing Cal physically as well as mentally. Which is exactly what Grimm—Cal’s savage doppelgänger—wants. And when a covert supernatural organization decides that it’s time to put Cal down before he threatens pretty much everything else in existence, the brothers find themselves in a fight they actually might lose. But the dark temptations Cal has denied all his life may prove to be exactly what can save them.

Even if he must fall forever…

The House We Grew Up In: A Novel by Lisa Jewell (Contemporary Fiction, Atria Books) 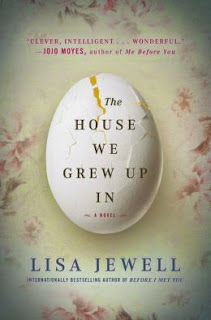 “Clever, intelligent…wonderful” (Jojo Moyes, New York Times bestselling author of Me Before You).

Meet the Bird family. They live in a honey-colored house in a picture-perfect Cotswolds village, with rambling, unkempt gardens stretching beyond. Pragmatic Meg, dreamy Beth, and tow-headed twins Rory and Rhys all attend the village school and eat home-cooked meals together every night. Their father is a sweet gangly man named Colin, who still looks like a teenager with floppy hair and owlish, round-framed glasses. Their mother is a beautiful hippy named Lorelei, who exists entirely in the moment. And she makes every moment sparkle in her children’s lives.

Then one Easter weekend, tragedy comes to call. The event is so devastating that, almost imperceptibly, it begins to tear the family apart. Years pass as the children become adults, find new relationships, and develop their own separate lives. Soon it seems as though they’ve never been a family at all. But then something happens that calls them back to the house they grew up in—and to what really happened that Easter weekend so many years ago.

Told in gorgeous, insightful prose that delves deeply into the hearts and minds of its characters, The House We Grew Up In is the captivating story of one family’s desire to restore long-forgotten peace and to unearth the many secrets hidden within the nooks and crannies of home.