My summer reading is going well, although it has taken me in a different direction than expected. I usually read contemporary romance during the summer, but this year I hit the list of great new LGBT releases I posted earlier in June and ran with those first! I've already reviewed a few of them: A Shiny Tin Star by Jon Wilson, Wingmen by Ensan Case, Butcher's Road by Lee Thomas, and Now and Yesterday by Stephen Greco. But, I also read The Filly by Mark R. Probst, and My Favorite Uncle by Marshall Thornton. So far, the books live up to the title of my post. There are two A reads in there, a couple of B+'s, and some pretty strong B's! 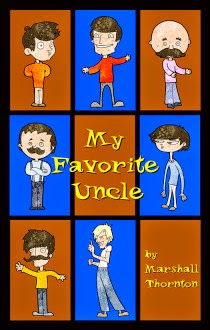 I need to clarify that My Favorite Uncle by Marshall Thornton (Wilde City Press, 2014) is a combination of gay comedic romantic fiction, instead of a straight up gay fiction story. It has a happy ending.

Take a single gay uncle used to privacy with little to no social life or contact with his closest family, throw in the unexpected arrival of a runaway nephew who on his 18th birthday signed himself out of a "gay rehabilitation" clinic where his religious parents sent him after finding him having gay sex, and there are going to be problems. Martin Dixon doesn't know anything about teenagers, he just wants peace and privacy, but going against his better judgment attempts to provide the kid with guidance. Carter wanted his uncle to be a buddy, not some old guy lecturing him about safety and a code of conduct. After feeling repressed by parents and environment, Carter ignores Martin's advice and goes wild on cruising escapades. They butt heads until each comes to the conclusion that if only the other had a boyfriend, all would be resolved. That's when the fun begins and real conflicts arise.

I first wrote some quick impressions for My Favorite Uncle at Goodreads immediately after finishing the book:


"I really liked this book and sincerely enjoyed the combination of humor and depth Thornton uses to engage the reader in this familial, generational tale of personal discovery and rediscovery."

I would like to add that Thornton has a knack for reeling the reader in with his characters' narrative, which becomes evident in this book soon after beginning the first chapter. Thornton utilizes two points of view that of the uncle and nephew, so the reader gains a full picture of events from both perspectives. Humorous scenes are driven by misunderstandings due to the generation gap between Uncle Martin and Carter as well as by the different lifestyles they've lead. However with the deeper, sensitive issues and resulting heartbreaking moments Thornton weaves with the humor, this novel becomes more than a cute comedic read. As Martin helps Carter navigate new waters, his own personal lifestyle comes into question and character growth (and I don’t just mean for the young nephew) becomes key to this novel’s successful conclusion. A B+ read for me, My Favorite Uncle by Marshall Thornton is a recommended read.

Reading: Within this grouping of LGBT reads, I began reading Let Me See It: Stories by James McGruder but had to put it aside to read my TBR book of the month. It is a slow going type of read, but I hope to pick it up again and finish it before long because I have other books to get to. I'm in the process of finishing up The Full Ride: Bottom Boys Get Play by Gavin Atlas, I already have Little Reef by Michael Carroll in my Kindle, and there are some August releases that I don't want to miss.

Additionally, I began reading from my Summer Wish List: SFF/UF list and will be posting an update on those books soon, as well as on contemporary romances, rereads, and July 'must reads.'