Now and Yesterday by Stephen Greco 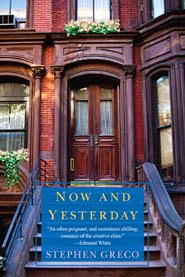 I love books that explore generational differences through intimate relationships and the effects those differences may or may not have on the individuals. Stephen Greco's Now and Yesterday in-depth exploration of aging and the evolution of relationships through queer history from the 70's gay revolution to current times, partly met my personal expectations of this of novel.

Through Peter's character, Greco focuses the romance aspect of his novel on struggles faced by survivors of an aging boomer generation of gay men who lost its vast majority to the AIDS epidemic, limiting choices to those looking for a meaningful relationship to a much-reduced group of contemporaries or men from a much younger generation. Additionally, because Peter's portrayal is largely anchored to the past, it affords Greco the opportunity to incorporate 70's post Stonewall queer liberation details and its resulting history through the same character.

Peter, a man of a "certain age," considers himself forward-thinking with a focus on the now and outlook toward the future. He uses that outlook and innate insight to maintain a successful career as an advertising executive. But musings about aging and the past are triggered by loneliness after he befriends Will, a young bartender for whom he develops a strong attraction that turns to love. It takes Peter a long time to get unstuck while he processes the past to make a grab for the future.

An AIDS survivor and widower, Greco's Peter is aging well and financially successful. In reality, Peter became a victim of grief after the loss of his partner Harold in 1989, and a man who gave up his dreams and settled -- first for a career in advertising and later into a ten year relationship with the wrong man. He struggles with these issues throughout the novel, both the settling and abandonment of dreams, which Greco uses to incorporate (the loss and restoration) of guidance as a theme. A theme explored simultaneously through Peter's past and Will's uncertainty about his future.

Greco portrays the 28 year old Will as a young, beautiful, rudderless man whose search for a future becomes a riddle he can't seem to solve, but who harbors a desire for a "true connection" that keeps bringing him back to Peter.


"So what's the big play now that you're an honest man, Will? A career, a relationship? A family?"
"I don't know, I don't know! I never had to know these things. I don't know how to know them."

In Greco's novel, Will represents a generalized view of a younger generation of gay men who seem lost and looking for success in a New York City where what you do = who you are. This view is clearly stated in a conversation between Peter's friend Jonathan and Will:


"Forgive me for saying so, but your generation is fucked," he said. "And I don't mean in a good way."
"I know," said Will.
"Completely overprotected and underchallenged."
"I know."
"And you've amused yourselves to death. No wonder all of you sit around watching vampire and zombie stories."

Will is not portrayed as a man without a thought otherwise Peter would not be attracted to him. He is interested in a stable relationship and queer history (although sometimes I thought that was his only attraction to Peter), and he succeeds in making a living as a magazine journalist, but he is ambivalent about everything. What makes him an "interesting" man? Why does he seem to have the upper hand in the relationship? The fact that he is young and beautiful? Is he really emotionally invested? Greco's characterization of Will eluded me and unfortunately I never saw him as more than a beautiful, if lucky, young man. Peter's insecurities about the age difference are understandable, yet he has so much more to offer including emotional involvement, leaving questions as to an emotional imbalance in this romantic relationship.

Tightly intertwined with these threads, Greco includes the story of Peter's friend and contemporary Jonathan, another widower and AIDS survivor sadly diagnosed with prostate cancer. Jonathan's vibrant personality, views of life, and witty dialogue, are uplifting and add life to this story. The intimate friendship and love between Jonathan and Peter provide the much needed connection with the reader that is missing from Peter's relationship with Will. I love Greco's characterization of Jonathan, a filmmaker who regardless of mourning his man to the end, unlike Peter, grabbed life by the balls and didn't let go until it was all done. I was particularly riveted by sections featuring Jonathan's film interview with a closeted poet who decides to come out in his 80's.

Greco's novel touched a few unexpected chords. I love the frankness and truth that comes across through his character's musings on aging, as well as how tightly he weaves in the impact, cost and effect of recent queer history. On the other hand, I found the proffered views about the younger generation of gay men to be somewhat bogged down by retro thinking and a tendency toward generalization in their portrayals. Regardless, Now and Yesterday is unquestionably a beautiful piece of writing infused with nostalgia and multiple layers that deserve a reader's time to properly dissect and process.