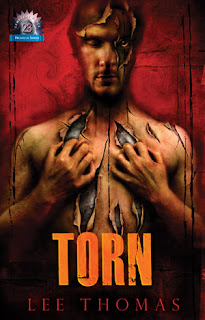 I've only read one book by Lee Thomas, his novel The German.  Since that turned out to be one of my favorite novels last year, I could not wait to read Torn. I was not disappointed.


"How do you go on when something like that happens to your child?"

That's how Lee Thomas' horror tale Torn begins, and with that one sentence you know it's going to be a chilling tale. What begins with Maggie Mayflower's disappearance and a desperate search through the woods surrounding Luther's Bend by Sheriff Bill Cranston, his men and neighbors, ends in a chilling and unexpected scene when as Maggie is found they realize she has been used as bait, and a horrifying act takes place right in front of the Sheriff and a few of his men. Bill quickly finds Douglas Sykes, the insane man who kidnapped Maggie, and  immediately concludes that Sykes is more than insane and dangerous, he's not quite human, and that having Sykes in Luther's Bend might just destroy the whole town.

In Torn, Thomas weaves a tale of horror with characters that quickly become important to the reader, from Bill and his family to his men, so that from the beginning the reader becomes invested in their well-being. Douglas Sykes' character on the other hand gave me the creeps, and that was his job in this story. His nightmarish singsong, rhyming, creepy dialog alone gave me goosebumps.

However as I found in The German, there's another story being told in this book that is tightly bound to that of the creepy characters and monsters. The title Torn refers to more than the graphic violence you might expect in a story where evil beast meets human. There's a dual meaning to the title, as a matter of fact "duality" is a word that also applies in more ways than one in this short story -- it is apparent in the monster that dwells within Sykes, as well as in the secrets that Bill keeps from the world.

Torn is a fast-paced novella packed with suspense, horror, and bite-your-nails action from beginning to end. I read it in one sitting and was breathless when done. I highly recommend it to lovers of horror or speculative fiction horror. This is another winner by Lee Thomas.

NOTE: I splurged on a signed special edition, hard cover copy of this novella. Even though the cover is really kind of scary, the book is actually beautiful with three illustrations inside the book by Vincent Chong that really capture the scenes described in the story.
Posted by Hilcia at 8:37 AM