Review: The Chaperone by Laura Moriarty 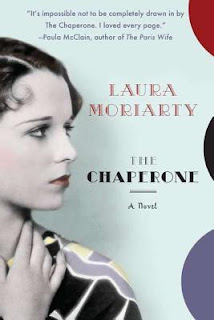 It's 1922, the population in Wichita, Kansas is approximately 8,000 strong and the Klan has claimed 6,000 of those citizens. The growing Midwestern city is just beginning to experience a few of the changes hitting the rest of the country influenced by World War I. Women still wear long skirts and corsets from a previous era and flappers with their short hemlines, bobbed hair, rolled down stockings and smoking habits might be acceptable in the big cities, but such things are viewed with a jaundiced eye in Wichita, Kansas. Divorces, condoms, and other means of birth control are unacceptable, Prohibition is in full force, and homosexuality and lewd cohabitation are both illegal.

Cora Carlisle's life with her handsome, prosperous husband Alan, a successful attorney who has provided Cora with everything to lead a comfortable, conventional lifestyle seems to be good. Or so it seems until Cora seeks the position as chaperone to accompany a talented and very ambitious Louise Brooks to the Denishawn School of Dancing in New York City and Alan has no choice but to accept Cora's decision. The further the train takes Louise and Cora from Wichita, the more obvious it becomes that there's something very wrong with both their lives. In this historical fiction tale, Louise Brooks' life is the real tale and Cora's the fictional. However, it is Cora's life that is central from beginning to end with Louise's providing the impetus for change in Cora's life.

Cora has secrets and has become an expert at following the conventional attitudes of her time to avoid being ostracized by the small community where she lives, plus her upbringing makes her understandably judgmental toward the beginning of the story. Moriarty begins revealing Cora's fascinating background through her memories of childhood as she was being transported to the Midwest in one of the "orphan trains" sponsored by The New York Founding Home, ending up in Kansas where she was adopted by a loving farming couple and eventually meeting and marrying Alan. Moriarty weaves these historical events into Cora's life as the real reason for her trip to New York City is revealed.

Louise, whose parents are well off but neglectful and uncaring, is portrayed as a young 15 year-old whose contempt for the world, arrogance, vanity and ambition hide a rather dark past. Her trip to New York City is more of a getaway than an opportunity to study. The 36 year-old Cora and the 15 year-old Louise are two very different women, so that where Louise is brash, aware of her beauty and not afraid to flaunt or use it to get what she wants, Cora sees herself as plain and non-sexual, an expert at wearing a public mask full of secrets, lies and repressed needs locked inside and bound up as tight as her corset. However, during those five weeks in New York City as Cora escorts Louise and experiences new freedoms, makes some soul shaking discoveries and meets new people who make a difference in her life, Cora's perspective begins to change and finds the courage to impulsively grab the only possibility she sees for happiness and a future.

I had a tough time reviewing this book and writing a summary that would give you a sense of the story without giving away spoilers or the wrong idea. The Chaperone by Laura Moriarty is historical fiction, not only because Louise Brooks is part of the story, but because although Cora's fictional character is really the protagonist, Ms. Moriarty also weaves historical events within her life and stays well within the boundaries of time period in detail. The atmosphere is excellent, and Ms. Moriarty also keeps to facts when in comes to the settings, both New York City and Wichita, Kansas.

I thoroughly enjoyed that aspect of the book, as well as how Moriarty develops Cora's character. Once Cora is revealed, she catches up to changes going on in America and we see a portrait of people who lived within the structure of society by necessity, without necessarily adhering to society's rules. Cora found the guts to choose such a life, and yes I was heartbroken that under the circumstances this was the best life Moriarty's characters could find at that time. There's a reason for the first paragraph in this review, all of it is relevant to the story. Secrets and lies. That's what this story engenders in the end. Lives built on secrets and lies in order to survive while outwardly conforming to a repressive society's rules just to find a little happiness.

Louise Brooks plays a pivotal role in Cora's life when they go to New York City, but frankly her contribution is more an aside to Cora's story than anything else. She represented a big change for women during that era, just as she does in this story, but eventually in this book just as in reality, Louise's contribution becomes more "newspaper clippings" and "gossip fodder" than anything else. I found that the sections that cover Louise's life are not as seamlessly woven in as expected and feel that they were more of an interruption to the real story being told than a pertinent contribution. Cora, Alan, Joseph, and Raymond are the characters whose lives and choices held my attention.

My other problem with the story is that it begins in 1922 and ends in the 1980's, covering Cora's long lifespan. The depth and details found from the beginning to the time Cora returns to Wichita to settle her life are fascinating. However after that, the story loses focus and the rest is rushed and lacks real depth, checking off major events in Cora's life, the amazing changes that take place in American society during that time period in history, as well as following Louise's descent into obscurity until the very end.

The Chaperone by Laura Moriarty was a quick paced historical fiction read, with a fascinating story involving the fictional characters that provided a small window into tough choices people had to make, women in particular, to find a small modicum of independence and a little happiness during a period in America's history that brought broad changes, but not enough. A mixed bag for me, the story provides the reader with excellent historical facts, atmosphere and background, however the main historical figure's contribution became a distraction, plus the story loses focus due to the long time period covered. Regardless, there is much to be enjoyed in this story, as well as much to think about in terms of the issues presented by Moriarty when placed in both historical and contemporary context.

You can find out more about Laura Moriarty here.
See book summary with pictures of Louise Brooks here.