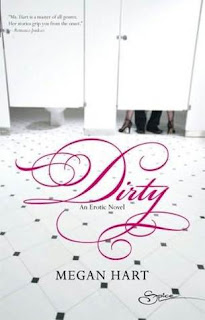 This is what happened...

I met him at the candy store.

He turned and smiled at me and I was surprised enough to smile back. This was not a children's candy store, mind you--this was the kind of place you went to buy expensive imported chocolate truffles for your boss's wife because you felt guilty for having sex with him when you were both at a conference in Milwaukee.

I've been hit on plenty of times, mostly by men with little finesse who thought what was between their legs made up for what they lacked between their ears.

Sometimes I went home with them anyway, just because it felt good to want and be wanted, even if it was mostly fake.

The problem with wanting is that it's like pouring water into a vase full of stones. It fills you up before you know it, leaving no room for anything else. I don't apologize for who I am or what I've done in--or out--of bed.

I have my job, my house and my life, and for a long time I haven't wanted anything else.

Until Dan. Until now.

I've been meaning to read Dirty by Megan Hart for years, and it has been in my "to be read" pile for quite a while too. This month's theme for the TBR Challenge is a "steamy read" and boy does Dirty fit that theme so far! Yes, so far. I was not able to finish the book in time to post a complete review due to my usual challenging family life. However, I wanted to post my impressions of what I've read so far and how I feel about it.

Dirty is narrated by Elle and it begins with the above passage when she meets Dan at an adult candy store. She's a brilliant woman with an excellent position, her own home and what on the surface could be a satisfactory life for anyone. But it is almost immediately apparent that inside Elle is broken, and in the past her way of fixing that empty broken space has been through mindless sex with strangers and the consumption of alcohol. She is a "black and white" woman, leading a colorless life and hiding behind a mask by wearing conservative clothes and displaying a distant, detached and bland personality in public, but we know that Elle is a very different woman.

Angel? Demon? Ghost? What is she? Who is she? That is what Dan wants to know once the two of them meet again and following his instructions, as well as inciting the moment, Elle more or less has public sex with Dan on a dance floor. However, Dan soon finds out that although Elle enjoys following directions during a sexual haze, she is not willing to do so when it comes to her personal life. There is no room for intimacy in Elle's broken life. She won't allow it, at least not until Dan slowly manipulates and begins to coax personal information out of her, talking her into seeing him again and again.

I'm also curious to find out, why Dan? He's one sexy man! Dan can get any woman's blood pressure up in less than one minute. But, he's also hmm. . . perfect for the circumstances -- willing to unravel the mystery that is Elle without judging her. So you can imagine that at this point I'm loving Hart's characterization of Dan.