Summer! For me, summer is nothing without the game of baseball.

I don't usually blog about sports, although I'm a huge sports fan, and baseball is my all-time favorite sport. There's nothing like a hot, lazy Sunday afternoon baseball game. I prefer looong games during sunny days and weather I'm watching them on television or at the ballpark, alone or with lots of company, it doesn't matter to me it's still heaven.

I love to read a good book with the sounds of a baseball game as background. I'm a bit (a lot) superstitious, and when my favorite team is playing and working on a win or a comeback, there are times when I'll look up from my book ONLY after that hit, home run, or strikeout happens -- and of course I won't remember what I was reading because I'm really paying attention to the game. My heart beats a mile a minute, and it's both an agony and a pleasure!

As a reader and a sports lover, it's interesting that I rarely mix the two. But recently, I've read a few books that integrate the game of baseball. Of those books, it is not surprising that the two that truly stand out are Steve Kluger's Almost Like Being in Love and Last Days of Summer. Why? Mr. Kluger obviously has a deep understanding of the game, and it seems as if he finds a way to integrate baseball into all his stories in one way or another. I have his entire backlist in my TBR, although I haven't yet read them all. Actually, Mr. Kluger is a Boston Red Sox fanatic, (see his website), so you know I must really love his writing... because well.. I happen to be a Yankees fan, and if you follow baseball you know what that means -- lots of rivalry there to put it mildly. ;P

In Almost Like Being in Love, a GLTB romance, one of Kluger's characters Craig (a jock) influences the other, Travis (a nerd), to the point where Travis lives his life while relating everything to baseball and its rules. He becomes a history professor at USC, and even there Travis relates history to baseball. I loved it! I think one of my initial thoughts and comments when I read this book was: "I'll never think about Alexander Hamilton again without thinking about baseball. Ever!"

Here's an example so you can see what I mean:

Issue: Once we'd won our independence from the Crown, how were we going to set up house?

Objective: Proving that baseball and the United States Constitution were founded on the same set of rules, as outlined in The Federalist Papers by Alexander Hamilton.

Argument: (extract)... If it hadn't been for the fact that conservative rich guy Thomas Jefferson (National League) and free-wheeling loud-mouth Alexander Hamilton (American League) detested one another on sight, the Founding Fathers might never have stumbled upon the same secret the populace had discovered years earlier on a rounders field: the dynamic upon which to build a true democracy and, incidentally, a Boston Red Sox legacy as well.*

*See, Carlton Fisk's home run off of Pat Darcy on October 21, 1975.
("We hold these truths to be self-evident that all men are created equal.")

In Last Days of Summer, Kluger uses a combination of fiction and history when it comes to baseball. Set in New York during WW II and featuring the New York Giants as the central team, the story is chuck-full of baseball lore and references. Kluger's love of the game is more than evident in this gorgeous story about a rough, well-known baseball player and a smart-aleck(y), adventurous boy whose determination becomes legendary. Of course setting the story in New York City, Kluger also features "dem bums" the Brooklyn Dodgers as the Giants' main competitors, and of course the New York Yankees, although interestingly enough for the most part he seems to gloss over the Yanks... hmmm... I wonder why? [grin].

This book is not only a gorgeous read for all the reasons I detailed on my review, but if you're a baseball fan and a lover of its history, then it's just fun. If you (like me) can get lost researching stats, confirming exactly where Kluger uses fictional information and/or where he uses baseball history, then you can definitely have some fun with this book. As I mentioned, I'm a bit of a baseball freak (geek), so I've had tons of fun (and I'm not done yet) going through some of the stats, names and information Kluger uses in this book.

Of the historical baseball facts Kluger uses in Last Days of Summer, I'm going to highlight a favorite (my choice should not be a surprise -- my husband who's a diehard Dodgers fan didn't love my choice... oh well!). It is a newspaper-like article and stats page (pages 192 & 193) from Game 4 of the 1941 World Series between the Brooklyn Dodgers and New York Yankees:

(excerpt)... Brooklyn hurler Hugh Casey let loose with a perfect breaking curve to Yankee right fielder Tommy Henrich, who sung on strike three -- and whiffed. And that should have been the ball game. But the Brooks' usually topflight catcher Mickey Owen had other ideas when he missed the ball entirely -- and by the time he'd retrieved it from the Dodger dugout, Henrich had made himself at home on first. But that was only the beginning....

Yankees went on to win Game 4 by a score of 7-4 and the 1941 World Series. Hmmm... Charlie and Joey were NOT happy and of course they disagree as to what reaaaally happened, an argument that goes on between the two throughout the whole book. I love this story... just love it. 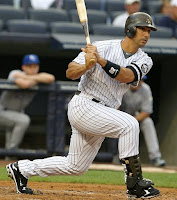 And of course since Carlton Fisk was mentioned above and bringing this post around to current events, I just HAVE to mention Jorge Posada! The current Yankees catcher who reached 1,000 RBI yesterday, having played 1,660 games throughout his career (NYY 1995 to present).

With that 1,000 hit, he joined an amazing group of catchers: Johnny Bench, Gary Carter, Carlton Fisk* and Ivan Rodriguez as the only catchers in Major League Baseball history to hit 250 home runs, 350 doubles and a record 1,000 RBI. You go Jorgie!


********
So what's your favorite sport? Do you have one? Any favorite sports (or baseball) related books that you would recommend?