This was actually an unplanned re-read. :) My husband asked me some questions about the end of this series and having read this book in 2007 when it first released, I remembered the overall plot but the details escaped me. I began skimming the book looking for the answers he wanted and when I couldn't find them... well... I got caught up and re-read the whole book! Definitely not planned since this book is 759 pages long! But, I'm glad I re-read it, now I'm ready for the upcoming movies and the details are fresh again. :D 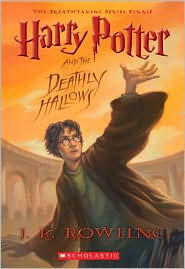 Harry Potter and The Deathly Hallows is the last book of J.K. Rowling's amazing YA Fantasy series and although it is the one with all the answers and it provides an incredible finish, it is not necessarily my favorite.

The story picks up right as Harry is about to turn seventeen and the protection spell that has been keeping him safe throughout the years is about to expire. A rush by the Order of the Phoenix to keep him out of the hands of the Death Eaters and away from Voldermort is on... and the book begins with a bang! Lots of action, permanent changes and more losses for Harry.

As the powers of the Dark Lord gain strength so does his power over the Ministry of Magic, life deteriorates for the general population and specially for Harry's friends and the Order of the Phoenix. Muggles, muggle born magicians and their friends are particularly in danger and begin to disappear. In the meantime, Harry, Ron and Hermione stick to Dumbledore's plan to continue searching for Horcruxes in an attempt to weaken and destroy you-know-who. Terrible stories and rumors about Dumbledore and his family circulate and Harry begins to doubt Dumbledore's real intentions, his love and true character.

Once the three friends are forced to leave on their journey, the story meanders with Harry, Ron and Hermione going from pillar to post trying to figure out things without much success. Of course, everything they do and the little they do find out has a purpose and eventually it all makes sense and becomes part of the big puzzle, but in the meantime the whole process slows down the pacing in this story to a crawl. At this point, the book becomes a tough read for quite a while and this is a long book... but once you get past that, the fun begins again. I do recommend that during this slow time, even when tempted, you not skim because you'll miss important details as Harry chooses between what is right and what is easy once the Deathly Hallows come to light.

The pace picks up during the second part of the book as the pieces of the puzzle begin falling into place. This is a re-read for me, and it still amazes me how Rowling ties up so many threads and uses seemingly insignificant details from all the books in this series to come up with the final answers. I must admit to being a bit disconcerted about those answers in the end. They were quite "brilliant" actually... brilliant in their simplicity and always there, really. But I know I didn't figure out those answers until I read them, and that I really appreciated.

What else did I love about the book? The characterization. How can I not appreciate character growth and development? I figure when you feel as if you know characters inside out by the end of a series, that's great development and that happens with more than just the central characters in this series -- Dumbledore and Severus Snape are great examples. Secondary characters are so incredibly important to this series' great success. In this book, Neville is also one of those minor characters whose growth I most noticed and appreciated. He is such a key character and one I think is often overlooked.

The second part of the book is action packed, there's a great battle with sad losses and great victories, all of it quite spectacular. In the end I couldn't help but feel for Harry... all those losses and all that sacrifice along the way from childhood to young adulthood. I wanted happiness, peace, love and a family for him, he deserved that and more. Rawling does give the reader a glimpse into Harry, Ron, Hermione, and Ginny's futures that I found sweet and a little nostalgic. A classic young adult series, no question about it. Brilliant!