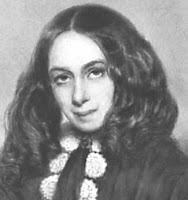 Elizabeth Barrett-Browning (March 6, 1806 – June 29, 1861) was one of the most prominent English poets of the Victorian era. She was contemporary to such well-known poets as Alfred Lord Tennyson, William Woodsworth and the man who would later become her husband Robert Browning.

Elizabeth was born in County Durham, England. She was allowed to attend lessons with her brother's tutors and later became a highly educated woman, mostly through her own efforts. At age 20 her health was weakened by an undiagnosed illness of the lungs that quickly made her an invalid and plagued her for the rest of her life -- an illness that led to a life-long addiction to opiates.

Her early works were published from 1820 - 1844, beginning with The Battle of Marathon: A Poem and ending with Poems, a highly acclaimed and well-received book of poetry published in Britain and the United States.  Later in life, Elizabeth's writing was influenced by social issues affecting her times, including women's roles in Victorian society. This influence can be found in Casa Guidi Widows (1848-1851) and Poems Before Congress (1860) where she took a stand against social injustice, including slavery, child labor, and anti-government subversive movements in Italy. Her poetry writing style influenced American poets Edgar Allan Poe and Emily Dickinson.

Though Elizabeth was an accomplished poet and had what was considered a good body of work before she met Robert Browning, and she later wrote socially conscious works, including her well-known verse novel, Aurora Leigh (1857), she is best remembered for "Sonnets from the Portuguese" (1850). These are a series of love sonnets Elizabeth wrote while Robert courted her.

Today I've decided to share two of these sonnets with you. These are both popular, well-known and beloved by many (especially Sonnet No. 43). I hope you enjoy them.


Sonnet No. 14: "If thou must love me, let it be for nought"
If thou must love me, let it be for nought
Except for love's sake only. Do not say
"I love her for her smile... her look... her way
Of speaking gently, for a trick of thought
That falls in well with mine, and certes brought
A sense of ease on such a day"
For these things in themselves, Belovèd, may
Be changed, or change for thee, and love, so wrought,
May be unwrought so. Neither love me for
Thine own dear pity's wiping my cheek dry,
A creature might forget to weep, who bore
Thy comfort long, and lose thy love thereby!
But love me for love's sake, that evermore
Thou may'st love on, through love's eternity.
✷✷✷✷✷✷✷✷✷