Review: Kiss Me if You Can by Carly Phillips 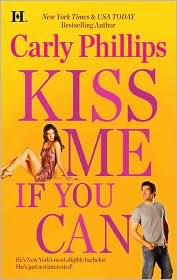 Sam Cooper (“Coop”) has just become the most eligible bachelor in New York City. Now that he has foiled a jewelry-store robbery and has been rewarded with the ring of his choice, single women all over the city are fawning over the crime reporter. But Coop isn’t interested in the admirers sending racy underwear his way. His attention is centered solely on Lexie Davis, the only woman in the city who claims not to be interested in his bachelor status.

Instead, free-spirited Lexie is interested in Coop’s antique ring, and its – potentially scandalous – history in her family. But Coop is quickly becoming more than just her route to the ring. When his investigation starts to uncover the truth, will she trust her heart – and her family secrets – to this most eligible bachelor?

Kiss Me If You Can, a contemporary romance by Carly Phillips, is the first book in her Bachelor Blog series. This is the amusing story of how Sam (Coop) Cooper and Lexie Davies investigate a ring's mystery, reveal old family secrets that changes lives, and in the process fall in love.

It all begins with a heroic act by Coop as he stops a jewelry store robbery. As a consequence of this heroic act, a few events take place: Coop is caught on television and his actions become public; when a reward is offered, he chooses a ring; and, he's chosen as the "bachelor of the week" by the popular Bachelor Blog. Within a day, poor Coop is swamped by invitations from women trying to get his attention and women's pictures, letters, and underwear arrive in the mail by loads. In the meantime, Lexie and her grandmother Charlotte see Coop's television interview and while both are taken with his gorgeous looks, Lexie focuses on the ring Coop chose as his reward. It looks similar to a necklace her grandmother prizes and wears daily. She decides to contact Coop and purchase it as a gift for her grandmother's 80th birthday.

Lexie and Coop are attracted to each other immediately. I like that they're both upfront and direct about their attraction for each other and willing to act on it, as they decide to date while working on the case of the stolen ring. Both Lexie and Coop carry baggage from previous relationships, particularly Lexie who travels constantly and doesn't even own an apartment, yet their attraction is such that they are willing to act on it on a temporary basis. From the beginning, there's great chemistry between Coop and Lexie and you can almost feel them click. However, the conflict here is one of differing personalities and personal goals. These are two very different people who can't seem to compromise and avoid addressing real issues.

The secondary story and characters in Kiss Me if You Can were quite entertaining. Charlotte, Lexie's grandmother, is portrayed as an eccentric character full of life and interfering. Together with her best friend Silvia, she makes their part of the story a fun one. Sara, Coop's cop neighbor, had a small part to play, but I liked her protective and direct style.

Kiss Me if You Can is a romance with great potential and front loaded with steam. As Phillips develops the relationship, and with the focus of the story changing to the investigation of the ring's theft, sexual tension and some of that heat between Coop and Lexie is somewhat defused. Still, this is a quick paced romance with some heat, humorous moments and witty dialogue, and I couldn't help but enjoy the secondary characters -- Charlotte and Silvia are a hoot. I'll be reading the second book in this series, Love Me if You Dare.

Visit Carly Phillips here.
Posted by Hilcia at 9:27 AM