Mini-Impressions: Have You Seen Her? by Karen Rose 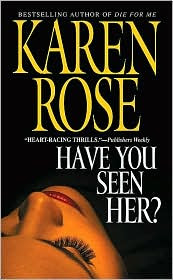 One by one, the girls disappear from their beds at night. Each one is pretty, with long dark hair. And each one is found brutally murdered.

Special Agent Steven Thatcher has sworn to find the serial killer preying on this small town. As the investigation pulls him one way, his family pulls him in another. A widower haunted by loss, he now worries about his son Brad slipping away. But there's a bright light in his life: his son's teacher, Jenna Marshall, has reached out to help. She's beautiful, kind, and considerate--and slowly, tentatively, she and Steven are starting to fall in love. But both have been hurt before--badly. And as the two try to find the courage to bare their souls, a murderer who has slain many looks for the real treasure he craves. He sets his traps. And waits. For Jenna...

I highly enjoyed Have You Seen Her? by Karen Rose. I'm finding that Rose integrates the suspense and romance tightly into her stories and that's something I always look for in this genre.

Steven and Jenna are a great couple. There is a lot of hot sexual tension going on between the two in the middle of all the other threads that Rose works into the story. And there's a lot going on: girls kidnapped and murdered by a serial killer, Steven's problems at home with his three boys (I loved his boys), Jenna's problems at school (she's a teacher), and of course Steve and Jenna's romantic conflicts.

I really like that although Steve and Jenna are deeply attracted to each other quickly -- and looking at the timeline they act pretty quickly on that attraction -- they take the time to step back and let the relationship grow before making a commitment.

Rose writes graphic and violent scenes and her villain in this book is a sadistic one. As in Don't Tell, I was a bit disappointed with some of the over the top drama and action at the end, but overall Have You Seen Her? is a solid romance with likable characters and great, well researched suspense.