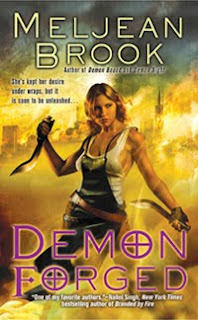 Four centuries ago, Irena and Alejandro would have succumbed to the need smoldering between them — if a demon and a monstrous bargain hadn’t shattered the possibility of love. Torn apart by shame, Irena avoided Alejandro for centuries — until a vampire’s call for help throws her into his arms again.

Alejandro can control fire, but he’s never been able to control — or quench — the flames between him and Irena. And he knows Irena, hardened by her hatred for demonkind, will never accept that he now works at a demon’s behest. But even as he fights for a second chance, a shocking betrayal and a deadly prophecy shake the foundations of the Guardian universe, and all Hell threatens to break loose…

I began and finished Demon Forged by Meljean Brook in one sitting. Well... holy angels and demons, I'm really loving this series, it just gets better and better! This book was great. Brook doesn't hold back when it comes to the action in her world or with moving the story forward within the series. She answered some old questions, took some of the new threads started in the last book, Demon Bound, followed through and further developed them in Demon Forged; as a result this book exploded with action. I'm loving the way Brook closes those threads and opens new ones in this world, leaving no room for gaping plot holes. Plus, you know there's so much more coming too.

Irena and Olek (Alejandro) were wonderful as the main couple. Irena wasn't exactly the belle of the ball when introduced in Demon Bound, personality-wise, but she is developed slowly in Demon Forged. She's no wilting flower, that's for sure, and I liked her! There's lots of tension and sexual tension between Olek and Irena and Brook really works developing the relationship -- something she's really done throughout the series with all the couples. The sexual encounters are hot, but it's not just about the sex between them, it's about the tension. Olek and Irena went 400 years wanting each other, so there are some really explosive scenes in this book.

When it comes to this series, I'm loving the way Brook develops and moves her world forward as well as the plotting. To that I'd like to add that while she introduces fascinating new characters in each installment, Brook really knows how to use already established characters in a meaningful and productive way. I'm loving that aspect of this series. When it comes to Demon Forged as a whole, the storylines, the ongoing battle between the Guardians, demons, vampires, etc., are all really engrossing and she accomplishes this while maintaining the couple in the center of all the action. I can't wait to find out what happens in Demon Blood.