Review: The Many Sins of Lord Cameron by Jennifer Ashley 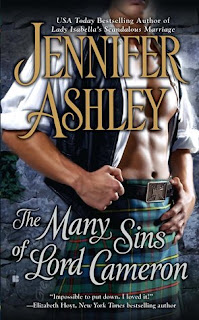 A renowned rake, Cameron Mackenzie doesn't care if Ainsley Douglas has a virtuous excuse for sneaking around his bedchamber. He only cares that she's at his mercy. One kiss at a time, he plans to seduce her. But what starts out as a lusty diversion may break Cam's own rules.

I enjoyed the first book of this series, The Madness of Lord Ian Mackenzie, but was a disappointed in the second book, Lady Isabella's Scandalous Marriage. Thankfully that's not the case with The Many Sins of Lord Cameron. I enjoyed the third book in Jennifer Ashley's Mackenzie Brothers historical romance series much more than that last book!

Cameron and Ainsley's attraction to each other flares under rather interesting circumstances. Cameron finds Ainsley snooping around his bedchamber, and thinking that she's there for seduction decides to please himself and the beautiful Ainsley Douglas. The attraction is mutual and they share a passionate and unforgettable moment. But Ainsley is married and turns down Cam's advances.

Years later, Ainsley is a widow and acting as the Queen's agent in a secret matter of the heart that involves blackmail. As a result during a house party at Hart Mackenzie's home, history repeats itself when she again finds herself in Cameron Mackenzie's chambers looking for a missing letter and gets caught by Cam. The old mutual attraction flares up with a vengeance and as Ainsley continues on her errand for the Queen, she finds in Cam both an ally and a man that's dangerously seductive.

I liked both Ainsley and Cam. Ainsley's life is that of a young woman who married a much older man and as a widow has been left without resources and dependent on her older brother. As the Queen's lady, her life is limited to the court and to service, leaving her with little time for socialization or a personal life. On the surface Ainsley gives the impression of being a demure lady, but in reality she's passionate, intrepid and determined. She's perfect for Cam.  I think it is lovely that although Ainsley was in a marriage of convenience and later widowed, her husband was a man that she both honored and respected.

Cam, well... he's had an angst-ridden life filled with childhood abuse and a marriage to a deranged woman that left him scarred for life. Cam feels more at home with horses than he does with people, and who can blame him after what he went through? He seeks the company of married women with shady reputations and doesn't ever want to marry again.

I love the fact that Cam "sees things in color" when he is with Ainsley as she brings him back to "life." I really liked that while trying to seduce Ainsley, he's caught and falls hard! Cam and Ainsley sizzled with passion too, and Jennifer Ashley really builds up to that passion with plenty of sexual tension. I especially loved the sensuality of those scenes with the buttons (those of you who have read this book know what I'm talking about). Most of all Cam and Ainsley clicked as two people who fall in love but that also become friends and lovers, and I thought that was just so important for Cam after his traumatic past.

Making Cam's son Daniel part of the romance was an excellent move on Ashley's part. Despite the fact that Cam has been portrayed as a rather nonchalant type of father throughout most of the series, Daniel is the most important person in Cam's life as it is revealed in this story. Cam is protective by nature, loving, and passionate. Those parts of his nature, however, were severely damaged by his deranged first wife before she died. So while Cam and Ainsley's romance evolves at a good pace, most of the conflict in this book is about Cam working out issues that were caused during his first marriage so he can find happiness with Ainsley.

The whole "Mrs. Brown" sub-plot was interesting and it served its purpose, but it was not arresting, neither was the blackmail sub-plot. I thought they were both obvious devices to get Cam and Ainsley together and as such they worked well enough without adding much interest to the story.

The Many Sins of Lord Cameron is the type of historical romance you'll love if you're not looking for a lot of controversy between the two main characters, or if you want to feel great about a man who has suffered and finally finds that elusive happily ever after. I love that Cam did.  You won't find a lot of conflict between the protagonists in this book, instead you will find a good, solid historical romance full of passion and emotion.

And what of the remaining Mackenzie brother? Well, I've always liked Hart and now that Eleanor has finally made an appearance can't wait to read their romance. And eventually we will have Daniel's romance to look forward to...I can't wait to see how he turns out. In the meantime, for those of you who love Ian... don't forget to look for the breakfast scene with the honey pot. I loved it!