Review: A Strong and Sudden Thaw by R.W. Day 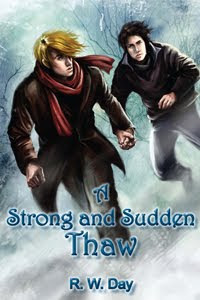 R.W. Day's beautiful prose, characterization, the post-apocalyptic fantasy world she created and the young adult, coming-of-age story in A Strong and Sudden Thaw caught both my attention and imagination from page one and I couldn't put the book down until it was done.

Approximately one hundred years after the Ice nearly ended civilization, the people of Moline, Virginia are still recovering from the catastrophe. The cold and snow still plague the north, but Virginia is a place where people can live, if not thrive. In some respects there's a regressive quality to life in Moline, as the people lead a life comparable to that lived in early 1800's America, with no electricity or running water, a one-room school house, a healer instead of a doctor, and the communing having adopted hardworking and god-fearing conservative values that at first glance seem quite familiar, but that later are revealed to be reactionary and extreme.

Using a beautiful narrative voice I fell in love with, A Strong and Sudden Thaw is told from David Anderson's point of view. David is the son of a Moline farmer and almost 17 years old. In Day's world, as in olden times, when David turns 18 he'll be considered a man in his community. When we first meet him, he's conflicted about his future and his straitlaced mother's plans to marry him off to the schoolteacher's daughter. David is part of a beautiful family -- all of them key secondary characters that complete this story.

David meets the new healer's assistant, Callan Landers, during a visit to the healer's house and they forge a bond through their love of reading and books. As the friendship grows, David slowly begins to feel a confusing attraction for Callan. During one of his visits to Callan, while accompanied by Elmer, a combination town bully and liar, he's shocked when he surprises the local artist, Taylor, performing oral sex on Callan. Elmer immediately runs to the authorities and Taylor and Callan are arrested for sodomy.

Following a painful trial, Callan is paroled with the condition that he will have no further personal contact with David. This is where David's loyalty and strength of character come to the forefront and we begin to see real character growth. He finds ways to see his friend Callan, and during this time both discover their love for each other. But a relationship between them is dangerous, if not impossible, and as they face dangerous situations and self-doubts, they also discover other sinister events that will have a profound effect on the people of Moline and their surroundings.

David is a well-defined central character. The reader follows David as he struggles to discover his strengths and becomes who he wants to be, an honest, independent-thinking David. Callan is also a well-drawn character, although as seen from David's point of view he doesn't come across as clearly defined. Besides David's family, Day develops other secondary characters within Moline's community to give this story depth.

Although R.W. Day maintains the focus of the story on David and Callan, there's a lot more to this book. The people of Moline are dealing with different threats: a pair of dragons have mysteriously appeared and are killing livestock and small children; the local representative from the Department of Reintroduction and Agriculture denies the existence of the dragons and refuses to help; and a neighboring town is suddenly abandoned without explanation. Day integrates all these threads, including Callan's sodomy arrest and trial, to create a cohesive story.

A Strong and Sudden Thaw was a page-turner full of adventure and one that drew deep, conflicting emotions as the author swept me to the end and a partial resolution to the conflicts. Although those resolutions are satisfactory, it is obvious that there will be a continuation to the overall story arc. The sequel Out of the Ashes will be releasing soon and I personally can't wait to read it.

Genre: LGBT YA Sci-Fi Fantasy/Speculative Fiction
Sequel: Out of the Ashes (coming soon)
Re-released:  January 30, 2009 by Lethe Press
Grade: A-