Review: One Season of Sunshine by Julia London 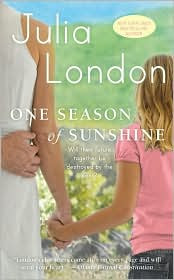 Adopted as an infant, Jane Aaron longs to know the identity of her birth mother and why she gave her up. Her only clue is the name of the small Texas town where she was born, so she’s come to Cedar Springs for answers.

Handsome ad executive Asher Price lost his wife, the beautiful, mysterious Susanna, in a terrible car crash eighteen months ago. When he hires Jane as the nanny for his two children, sparks fly. Jane finds herself falling in love with both Asher and his children, but begins to suspect that Susanna was not the perfect mother and wife the family portrays her to have been.

As Jane gets closer and closer to finding out the truth about both her own and Susanna’s past, devastating secrets begin to emerge that may be more than anyone can bear. Will the truth bring Jane and Asher closer together or tear them apart forever?

Jane is a 30-year-old woman who was adopted at birth and is driven to find her birth mother. She has a great life -- a wonderful, loving family, a great career as a teacher, and a loving boyfriend in Jeremy. Yet she leaves it all behind and moves to Cedar Springs, the small town where she was born, to find out who she really is. Jane can't seem to move on with her life until she uncovers that piece of her that seems to be missing. After her move to Cedar Springs, Jane lands a temporary job working for Asher Price as a live-in nanny to his two children, Riley a 12-year-old girl and Adam a 5-year-old boy. The children lost their mother Susanna in a terrifying car accident and Asher owns a business that demands much of his time. He leads a life full of guilt and loneliness. Things progress from there.

This is an all around difficult story with likable and not-so-likable characters. London is actually quite ambitious in her exploration of serious subjects in this book: adoption, death of a spouse, bipolar disorder, guilt-ridden father, traumatized children, dysfunctional families and a romance to tie it all up. First we have Jane, whose sole purpose seems to be "finding herself" no matter the cost. She is portrayed as a woman who at times seems lost, ambivalent and often self-centered while on her quest. Throughout her journey Jane knowingly hurts the people who love her, and while her needs are understandable, her actions are often questionable.

We then have Asher, his traumatized children and his marriage to Susanna. All three are key to this story as are the characters. Asher is portrayed as a man who adores his children but who is pulled in all different directions due to his business commitments. He carries more baggage than an Airline on an overbooked flight. Asher feels guilt because he can't be there with his children who are obviously traumatized by their mother's death and his continued absence, he is lonely and depressed after a horrible and unsatisfactory marriage, and he's surrounded by self-centered people who are detrimental to his children's welfare. There are a lot of toxic people surrounding this family.

Susanna, although dead, is definitely a big part of this story. Through her character, London explores the long-term effects that bipolar disorder has on the family. The children, especially Riley whose character is well defined in this book, are featured prominently and their problems are well integrated both with the overall story and the romance.

Frankly I didn't know how Jane and Asher were going to work things out until the end. The romance between them took a while to get going, although the attraction was there from the beginning. The romance itself worked for me on some levels because London didn't give these flawed characters an easy romance or an easily obtained happily ever after.

One Season of Sunshine turned out to be one of those books full of flawed characters, questionable actions and complex subjects, yet I read it in one sitting and became invested in both the story and the characters. I wanted to know what happened to them all and once I finished the book they stayed with me for a while -- that was unexpected. Definitely an interesting read.