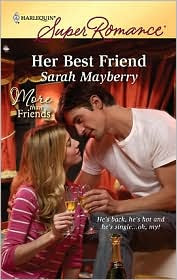 This was a category romance with the friends-to-lovers trope, a favorite trope and a triangle -- not a favorite romance device for me -- so this was a mixed bag. I'm really loving Mayberry's writing and in some ways this was no exception -- she puts together a good book in a few pages.
Quinn and Amy have known each other since they were born -- neighbors in a small Australian town. Amy develops a crush on Quinn at age 14 and she's pretty sure he feels the same way until Lisa moves to town. Lisa becomes their friend and she and Quinn become high school sweethearts and eventually marry. Amy spends 16 years secretly in love with Quinn, her friend Lisa's boyfriend and then husband. It's so uncomfortable and painful for her that she decides to distance herself from her best friends. A year after Quinn and Lisa separate and while they're going through a divorce, Quinn returns to town to help Amy achieve her dream and things change. Quinn is definitely attracted to Amy but things get complicated when Lisa comes back to town.

I liked the main characters and Mayberry again fleshes out her characters and the story. I enjoyed Amy and Quinn's rediscovering their friendship and going from friends to lovers. As always with a Mayberry book, there's sexual tension and build-up and she knows how to write those sensual scenes.

However, although there's no question that Quinn had deep feelings of friendship and then lust for Amy, I did have a tough time buying the true love part of it all -- the "you are the love of my life" and "I want to marry you" love. I don't know... I wasn't quite sold on that. For me, it had a lot to do with the length of time Quinn was involved with Lisa, and the fact that he didn't give Amy a second thought in all that time -- that pesky triangle. The timeline used to develop Amy and Quinn's romance was also a factor.

Although I enjoyed some aspects of the story, first my reservations about Quinn's feelings took away some of that enjoyment, and later Lisa's return and actions gave Her Best Friend a sense of predictability that made this read a mixed bag for me.