Review: True Love and Other Disasters by Rachel Gibson

I seem to be cycling back to craving those contemporary romances again. For me contemporaries are like a favorite candy, the more I eat... the more I want. Lately I've been reading quite a few of them and I hope to post some reviews for you this week. True Love and Other Disasters by Rachel Gibson is a book I've had in my TBR for over a year and finally read in July. 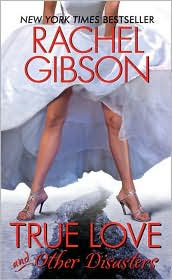 DISASTER NUMBER ONE: MEN
Hard knocks and hunger taught Faith Duffy not to believe in love. Still, when she married her very wealthy—and very old—husband, she became the perfect wife. He gave her security; she gave him fidelity and loyalty, but not her heart. And then he went to that big bank in the sky, leaving Faith with a lot of lonely nights, a pile of money, and a total mess of a pro hockey team. Heck, Faith doesn’t even watch hockey!

DISASTER NUMBER TWO: PASSION
But most of America and half of Canada is watching Ty Savage, team captain. His lethal sex appeal and deadly right hook make him the favorite of hockey fans. For most of Ty’s life, he’s dreamed of winning the Stanley cup. The last thing he needs is a gold-digging bimbo messing up his plans.

DISASTER NUMBER THREE: LOVE
Faith loathes Ty on sight, but she can’t stop thinking about him all day…and all night. Then a night of temptations ends with Faith in Ty’s bed, and she begins to see there’s more to him than sex appeal and slap shots. Ty discovers there’s far more to Faith than beauty and billions. A relationship with Faith is impossible, and falling in love---would be a disaster.

True Love and Other Disasters by Rachel Gibson is all about Faith Duffy who in the past was a stripper and playboy centerfold. When her 81 year old rich husband dies and she inherits the Seattle Chinooks hockey team and millions of dollars, her days as a trophy wife are over. The captain of the hockey team, Ty Savage resents Faith's ownership and fears for the team's future, especially since she doesn't even know the basics about hockey. Faith finds herself struggling to adjust to her new status as a widow, the changes in her life, her nasty step-son, the team, the media and sexy Ty.

This sports romance had a familiar feel to it. It reminded me a bit of Susan Elizabeth Phillip's It Had to Be You, except that the characters were not as strong and I thought it was a weaker version all around. Faith's character had some good points, but overall I found her to be weak. Yes she was a stripper and a Playboy bunny who married an 81 year man for his money, however she was not ashamed of her past, her years as a trophy wife, or her acquisitiveness. Her reasons were her own and heck they were hers and I personally didn't think she should be judged for those, as opposed to everyone else in this story including Ty. Faith decides to keep the hockey team against her better judgment and hires an assistant to learn as much as possible about hockey and the team, there's character growth there for her. All good so far, right?

Ty and Faith fall for each other despite the fact that Ty tends to think of Faith as a bimbo who can ruin his career, and a hot affair ensues. Initially Ty comes off as the typical macho sports hero, and he definitely treats Faith as a gold-digging bimbo. He's more concerned with his career than he is about a relationship, and he has baggage that comes out in the book. Ty wasn't exceptionally likable to begin with, but he grew with the story and although flawed, he made strides by the end of the story. Faith is a different story altogether.

Here's where I have a problem with Faith. Due to her insecurities, she can't seem to defend herself against those who insult her personally, she can't seem to say no to those who take advantage of her, and in the end she can't resolve her own problems. Someone else has to come and take care of Faith -- THAT doesn't change and neither do the other problems I've outlined above. Examples? Charity ladies (and others throughout the story) insult her to her face and she won't respond; her mother abuses Faith's trust and uses her blatantly but Faith never fights back; and when her step-son puts pressure on her, she folds. The big Captain of the hockey team has to save the day and take care of business because Faith folds.

The build up to the romance, sexual tension and scenes were good between Faith and Ty and I enjoyed the overall sports theme as well as a few of the secondary characters. However because of the problems I had with the characterization in this book, my overall enjoyment was limited and it falls more under the good but not great category for me.