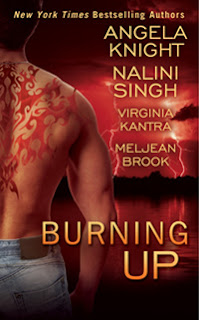 Burning Up is an anthology with Angela Knight, Nalini Singh, Virginia Kantra and Meljean Brook. I've enjoyed books by all four of these writers and looked forward to reading their short stories.

"Whisper of Sin" by Nalini Singh is a short story related to her Psy/Changeling series. This prequel features Ria and Emmet's romance. Ria is attacked in Chinatown where she lives with her family and DarkRiver changelings, including Emmett and Dorian come to the rescue. Upon meeting Ria, Emmett immediately becomes protective and defying her family, he becomes her personal bodyguard. An outside gang is in San Francisco challenging DarkRiver's right to their territory and the changelings are sure Ria and her family will be targeted again.

I enjoyed Ria and Emmet's romance, it was quick and although their attraction was the instant kind, Singh took her time developing their characters and the relationship. Ria's family plays a large part in the story and as secondary characters they give depth to this short tale. Singh features Ria's dual Chinese/American culture in this installment, giving her female protagonist family situations focused on her culture. I loved the way Singh showcased the passion as well as the differences and commonalities between Ria and Emmet. I also enjoyed the glimpse we get as readers into the changeling world before DarkRiver's power was established. This was a lovely romance full of delightful characters. Grade B+

Angela Knight's "Blood and Roses" fits the anthology's title quite well in that it's hot, and more erotic than a straight romance. It's a story about vampires, magic and monsters. The vampire Raniero is a knight and the king's Chief Investigator. He's traveling with his men to Lord Korban's lands to investigate rumors that he is cooperating with the Varil monsters. Waiting to ambush them is the evil Vampire Tannaz, two Varil and Tannaz' Blood Rose daughter Amaris. Blood Roses were created to mate with vampires and to keep them happy enough not challenge their king. Raniero is captured and taken to the castle where he's kept unconscious through a spell. Meanwhile, Lord Korban uses Amaris' three year old sister as hostage and blackmails Amaris into seducing Raniero, hoping he'll send the king a message stating that all is well, buying him time to complete his evil plans with the Varil.

Virginia Kantra's "Shifting Sea" was a prequel to her Children of the Sea series. This story takes place in Scotland in 1813 as Major Jack Harris, a soldier and survivor of a siege has recently taken over an unexpected inheritance. While out on a horse ride by the sea, he finds sexual solace with a beautiful woman. At first he thinks she's the town whore, but when they meet again his feelings change and soon Jack finds he loves Morwenna, one of the finfolk. This was a well told tale, full of the selkie myth atmosphere that Kantra weaves so well. However although the romance was enjoyable and pleasant, I found it lacking in impact. Grade B-

The novella "Here There Be Monsters" by Meljean Brook serves two purposes, it's the introduction to her new Steampunk series and it's the story of the pirate Eben "Mad" Machen and Ivy Blacksmith. A desperate Ivy needs to escape London and goes to Mad Machen for help. He refuses to take her aboard his pirate ship and when she offers herself as payment and he accepts, Ivy realizes she's over her head. Unexpected help arrives just in time and she flees from both London and Mad Machen. Two years later, we meet Ivy again as the relentless and furious Machen finds her hideout.

This was actually the story I enjoyed the most in this anthology. I love the way Brook takes her time to build the relationship, sexual tension and trust between Eben and Ivy. Theirs is a both a romance and an adventure. This story is not only full of the wonderful mechanical inventions and Victorian details that make Steampunk such a treat to read, but it's also full of action, passion and romance. I thought Brook did a wonderful job of combining all of these elements and introducing the worldbuilding to her new Steampunk series. Of course, all is not explained in this novella, there's still a lot of worldbuilding to do and I expect to see that in her upcoming release The Iron Duke. However, now I'm really excited and can't wait to begin this series. Grade A-