Review: No Limits by Alison Kent 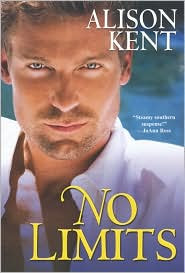 Simon Baptiste's latest SG-5 mission just went south in a major way. It seems like a good time to take are of some business back home in Louisiana. Simon knows it ain't going to be pretty. He's got old enemies in Bayou Allain who won't exactly roll out the red carpet. But Simon's first night back is more than he bargained for: Not only has the homestead gone to hell in a hand basket, but there's a half-naked woman hiding inside it -- a woman whose face Simon knows all too well. It's Michelina Ferrer; the sultry spokes model for her family's Ferrer fragrance empire -- and Simon's been starting at her picture on a billboard outside his Manhattan apartment for weeks...

Micky Ferrer came down to Bayou Allain looking for her old college friend, only to discover that Lisa Landry has been missing for days. As soon as Micky starts asking questions, someone runs her car off the road. She's hiding out in the old Baptiste place when Simon shows up -- and he's the hottest thing she's laid eyes on since she got to town. Simon agrees that something strange is going on and that Lisa's disappearance may be tied to it. As he and Micky search for answers, the sweltering heat makes it hard to keep their heads straight on their hands off each other...even as they unravel the small-town secrets that some people are willing to kill for...

Alison Kent is a new-to-me author, and No Limits a no expectations type of read. I understand this book is part of a long series -- the SG5 -- however, I think it reads well as a stand alone. The above book description is very thorough in the way it outlines the plot, so I'll just outline my thoughts.

No Limits gives us enough Cajun flavor without really steeping us into the culture or the true southern atmosphere of the Bayou. We get a sense of that flavor from some of the phraseology, usage of language and pacing, but the details are not really found here to provide heavy atmosphere.

Micky, as in Micky Mouse, reminded me of a cross between a super-model and the type of celebrity we see pictured in tabloids all too often. Although initially developed as an immature young woman who acts before she thinks and is adept at running rather than taking responsibility for her actions, her character does show some growth throughout the story. Simon is a character you'll recognize easily. He is a sexy ex-military, ex-mercenary who now works with the SG5 team. He is an alpha male who is not overdone in this story, although a bit brooding. I found the dialogue and tension between these two characters better than the chemistry.

King, Simon's cousin, is one of a memorable cast of secondary characters. A wonderfully brooding Cajun, King caught my attention from the beginning and kept it to the end of this story. Some of the most heated sexual scenes in this book are between King and Paschelle -- King's friend with benefits. As a secondary story, King and Paschelle's troubled, sexual relationship became my favorite part of the book. I certainly looked forward to every single scene where both these characters were included.

The mystery/suspense in the book was a disappointment for me. The villain of this piece is known almost immediately as is the reason for the crime. There didn't seem to be any surprises at the end.

No Limits was a mixed bag for me. I thoroughly enjoyed parts of it and thought Ms. Kent's secondary characters made the story -- from Judge Bear and pitiful Lorna to sexy King and Paschelle. However, I felt the suspense was lacking and the ending felt more like a "happily for now" than a "happily ever after." This book gets a C+ from me.

You can visit the author here. You can read an excerpt here.

Originally posted at Musings of a Bibliophile August 8, 2009
Posted by Hilcia at 3:16 PM