M/M Review: Out of Bounds by T.A. Chase 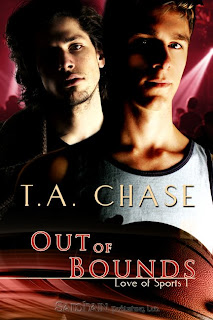 Can a sexy nightclub owner convince an all star basketball player to risk it all?

Professional basketball player Kasey Johnson makes a point of keeping his sexual preference under guard and out of the public eye. Empty, off-season flings are all he can look forward to until he retires. He figures his secret is safe -- until he meets Ingram Fletcher, a nighclub owner who ignites a passionate inferno in his body.

Gram has lusted after Kasey ever since the long, tall basketball player was traded to Phoenix a year ago. But with Kasey's twin brother running interference, up until now Gram's been unsure if it's safe to make a play. Then some incidental contact in the crowded club leads to a kiss that starts Gram wondering if a relationship is possible -- now, and beyond March Madness.

A romantic weekend together answers that question. Now the only one remaining is if Kasey is ready to make a fast break out of his comfort zone.

In Out of Bounds, T. A. Chase touches on a few different themes: gays in professional sports; coming out to the public; privacy vs. the public's right to know. Most importantly Chase focuses on a man's personal needs and happiness vs. his career and having viable future. This is Kasey's dilemma and the one he and Gram must face together.

The contrast between Kasey and Gram's developing relationship and the almost brittle desperation we see in Garrett, Kasey's twin brother, is startling and it serves Kasey well. The protective and close relationship between the brothers was both exasperating and touching -- just as those brotherly relationships tend to be.

Kasey and Gram's story as told by T. A. Chase is full of sexual tension and eroticism. The chemistry between these two is scorching, as is the love that flourishes between them. Although their first encounter comes quick, Chase develops their relationship. Kasey's slow realization that their relationship might be worth more than a few encounters, and Gram's unrelenting and surprising commitment won me over.

Out of Bounds is a wonderful addition to my growing T. A. Chase collection.

Originally posted at Musings of a Bibliophile August 11, 2009
Posted by Hilcia at 3:12 PM

Email ThisBlogThis!Share to TwitterShare to FacebookShare to Pinterest
Labels: 2009, Challenge, Grade B, M/M, Musings of a Bibliophile, Reviews, T.A. Chase