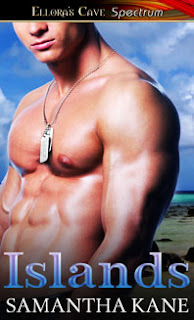 Lieutenant Commander Gabriel Conlan, United States Navy Seabees, knows he's not in Kansas anymore when he steps off the launch at the small island of Ile Dorée and sees gorgeous Frenchman René Dubois waiting for him on the dock. The year is 1943, the place is the Pacific and the world is at war. Free from the censure of the military, Gabe has an explosive affair with René. But when the world intrudes, Gabe denies René and tries to forget the best sex of his life.

The only westerner on his small Pacific island, René is desperately lonely. When the tall, lanky American steps onto his dock, René knows his life will never be the same. He teaches Gabe how to make love to a man and, unexpectedly, falls in love. René will brave prejudice, Japanese Zeros and Gabe's reluctance to find love at last.

Gabriel Conlan is a man of his times. A man who is used to being in command and control as a Lieutenant Commander in the U.S. Navy, but also a man who maintains that same control on his emotions. He knows that he can't let his true self show for a moment or his credibility and career will disappear in an instant. His self-contempt and repressed longings are made evident early on in the story, as well as his lack of experience in the love arena. Oh, he knows what it is to have sex with another man, but love? That, he has never experienced.

René Dubois is a Frenchman and the only westerner in a Pacific Island where he is responsible for all its inhabitants. A lonely and passionate man, René grew up in France where he was accepted as a gay man from an early age. He wears his passionate nature and capability for love like a second skin. Gorgeous and confident, René oozes the type of sensuality and determination that scares Gabriel.

In Islands, Samantha Kane writes a love story heavy in atmosphere and 1940's period details. She makes you feel as if you were there in the Pacific Islands during WWII during those terrible times of war and danger, and yet she provides that oasis for a short period of time where these two characters met and changed each other's lives forever. From the way Gabe held his cigarette, to the pacing of their dialogue, this felt like a period piece. I could visualize it as I was reading it.

Secondary characters and backgrounds are not neglected in this story either. Ms. Kane gives us rich details about the culture of the island and its inhabitants. The Fa'afafine are highlighted in this story as they play a part here. These are young men who think of themselves as females and are treated as such from the time they are children. They dress and act as females and are highly respected within the culture. We also meet other servicemen -- Mr. Watson's story parallels Gabe's, although in a supportive role. Gabriel and René stay as the focus.

Ms. Kane delivers a complete story with compelling characters, wonderful atmosphere and an intensity to her scenes that left me more than satisfied with this book. For me, Islands is a keeper and it will be re-read.


Originally posted at Musings of a Bibliophile August 2, 2009
Posted by Hilcia at 3:21 PM

Email ThisBlogThis!Share to TwitterShare to FacebookShare to Pinterest
Labels: 2009, Grade A, M/M, Musings of a Bibliophile, Reviews, Samantha Kane