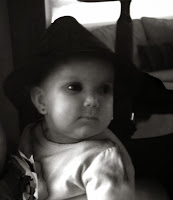 November means rainy days, Thanksgiving, the end of Fall and my youngest niece Natalia's birthday! She is now one year old. That's her  picture, wearing her father's hat during our family's Thanksgiving get-together. She's a hoot!

November is also a cozy reading month with all the cold, rainy days, and early evenings. This is the time of year when I begin to crave holiday books, science fiction, and romance. This year, November turned out to be a mixed bag. Half of my reads were average or below average, but I also read some fantastic books. Following is a list with comments.

Duke of Midnight (Maiden Lane #5) by Elizabeth Hoyt: A
With a strong heroine, a brooding hero, and a great plot, this book became one of my favorite in this already favorite historical romance series by Hoyt.

The Left Hand of Darkness (Hainish Cycle #4) by Ursula K. Le Guin: A
Ursula K. Le Guin is a new-to-me author within the science fiction genre and believe me, I am already a fan! Her prose is fantastic, and the core this story kept me riveted. This is not your typical forceful, action packed, science fiction, but a slowly built masterpiece. This book is from Le Guin's backlist, but definitely one of my favorite books of the year.

The Rosie Project by Graeme Simsion: B+
I picked up The Rosie Project after reading Leslie's review at Leslie's Psyche. I didn't know at the time that this was quite the popular read! I'm glad I picked it up because it turned out to be a great read for me. Don is one of those memorable characters that stayed with me.

Promise Me Texas (Whispering Mountain #7) by Jodi Thomas: B
A sweet western historical romance that is all about warmth, laughter, and love. This is a solid read that I just enjoyed from beginning to end.

The Secret History by Donna Tartt: B
Now, this was a long and interesting read. Tartt is a new-to-me author recommended to me by one of my brothers because her latest book, The Goldfinch, is making waves at the moment (I have it in my TBR). I want to review this book, so I won't say much about it, except that I found the format she used for this "whydunit," and the intense focus on the rather unlikable characters rather interesting.

How I Met Your Father by L.B. Gregg: B
This is definitely an L.B. Gregg novella. You can tell because her humor is all over it, as well as her knack for getting the reader to fall in love with her couple and involved in the story right off the bat. Fun, fun read.

Christmas in Snowflake Canyon by RaeAnne Thayne: B
I really like Thayne's contemporaries and this was among my favorite Christmas reads last weekend. I really liked the character growth, as well as the romance in this one.

Once Upon a Haunted Moor by Harper Fox: C+
Fox is a favorite M/M romance writer for me, and this Halloween read set in Scotland turned out to be really spooky. It's well written, which is not a surprise, but it's rather short with a romance that was too quick to develop.

My Own Miraculous by Joshilyn Jackson: C+
Joshilyn Jackson is a favorite women's fiction writer, and My Own Miraculous is a short prequel novella that introduces the main character to her novel, Someone Else's Love story, a book I have in my TBR and want to read in December. This prequel works well as an introduction, but of course it needs more detail.

Dark Witch (The Cousins O'Dwyer #1) by Nora Roberts: C
The first book in Nora Roberts' latest contemporary paranormal romance series, Dark Witch is nothing more than an average read. It is predictable for those who know her works well. There is really nothing new here. I recommend it to new readers of this author.

What the Bride Didn't Know by Kelly Hunter: C
A contemporary romance read with likable characters, a great premise, and a wonderful setting, but with so many tropes used that it just fizzled and ended up being an average read for me.

The Night Before Christmas by Kelly Hunter: C
A nice Christmas novella that was too short and where the main focus of the romance is interrupted with... filler.

From the Ashes (Fire & Rain #1) by Daisy Harris: C-
The basis of this MM romance by Daisy Harris is very familiar. It reminded me of "By the Numbers" by Chris Owen, and that threw me off from the beginning, additionally neither main character really grabbed my attention. The fireman lives with his family and lets them rule his life and the young man he takes home after his apartment burns down is not independent of mind enough for my taste. Actually, neither of them struck me as independent adult males for some reason. The romance is okay, but the characters bugged me.

Princesses Behaving Badly: Real Stories from History Without the Fairy-Tale Endings by Linda Rodriguez McRobbie: D+
This is a read that may be appreciated by some readers who are not keen on historical detail, but would enjoy snippets written in a chatty style. It's a beautiful looking book, but one that just did not work for me personally.

Second Chances (When Second Chances Count) by D.L. Roan: D
This is an M/F/M/M erotica piece with three brothers that find that one woman who will make them happy. It reminded me of the original August Brothers by Lora Leigh, although I believe it resembles Maya Banks' Coulters' Woman much more. This was way too similar and not as well done.

The Lord's Lover (Regency Triad #1) by Jenna Rose Ellis: D
This is a Regency historical and no, it is not a triad, but an M/M romance between a lord and his best friend who happens to be a servant. Somehow they bridge the gap between the master/servant AND homosexuality conflicts that arise. I had a tough time buying this story because of the historical time period and the way it all works out at the end with these men just living together as if all was well with the world.

The Reddington Scandal by Renee Rose: D
Historical M/F Erotica with a virginal bride and D/s flavor that just did not work for me, although it begins with a good premise. The woman's submissiveness and the male's aggressiveness with all the spanking because he needs to take his frustration out on her in the bedroom just bothered the heck out of me in this piece.

Stealing the Bride by Brynn Paulin: D-
SPOILER: This M/M/F erotic piece barely escaped an F or DNF from me. It's short and perhaps that's the reason I finished it. The "bride" goes on a camping trip right before her wedding and her two gay roommates show up to talk her into not going through with the wedding. After having shared an apartment for a few years, these two men confess they are really bisexual, not gay! Funny that nobody ever noticed!! Of course the boys want her and despite the fact that she's engaged, monkey sex ensues. The "groom" shows up to the wedding, but guess what? HE turns out to be gay! What? I can't recommend this one.

Reread:
The Sound and the Fury by William Faulkner
I have a whole post written covering my reread of Faulkner's The Sound and the Fury, but I'm thinking of just posting it at Quotes and Thoughts. This reread was a major success for me. It goes to show that sometimes rereads are worth the time.
Posted by Hilcia at 12:41 PM