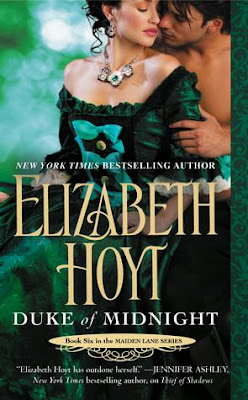 In Duke of Midnight, Elizabeth Hoyt follows through with her portrayal of sensual women who make their own choices when it comes to their sex lives even when they are virgins, as opposed to women who are "ravished" or seduced by the men they fall for. It has become a trademark of the Maiden Lane series. Most of the female protagonists to date feel caged by the societal roles imposed on them and manage to break free of those cages by making decisions that are not always traditionally accepted including the how and when intimacy with their men takes place. These women take the lead in such matters. The exception, of course, is Silence who, although embroiled in a public scandalous situation, plays a more traditional (historical romance) female role.

Artemis Greaves is one of the strongest female protagonists of this series. She has to be in order to go from the gray, invisible companion to her cousin, the spoiled Lady Penelope, to the woman who not only catches the passionate attention of the Duke of Wakefield, but becomes his ideal of what a woman should be. Artemis doesn't accomplish this with physical beauty or superficial seduction, she captures Maximus's attention, sparks his passion, and wins his heart with bravery, strength of character and will, passionate honesty, and intelligence. Artemis is loyal and fearlessly passionate in her defense of those she loves and has no scruples when doing so. She chooses to become Maximus's mistress and like the goddess of the hunt Artemis of mythology, she becomes his private goddess, his fearless Diana.

Maximus, the Duke of Wakefield is quite different from Artemis. He also has a strong personality, but tends to be overbearing and overprotective of those he loves. Outwardly, he is a stiff, humorless, and rather intimidating Duke. However, as Artemis and the reader get to know him, Maximus is revealed as a man who has been overwhelmed by grief, guilt, and duty since he was nothing but a boy. In his personal life Maximus is always a Duke and doesn't know how to be "just a man" until Artemis comes along to show him he can be both. Once she does so, he is as passionate about her, and much more romantic than I expected, as he is obsessed with what drives him to roam the slums of St. Giles.

Hoyt again works with two different threads, the romance between Artemis and Maximus and the adventures of the third Ghost in the slums of St. Giles. The romance is riddled with a few conflicts: first, Maximus decides early on to make Lady Penelope his wife, which places Artemis as her cousin and companion in an awkward position when her personal relationship with the Duke evolves. Second, Artemis wrestles with the unfair incarceration of her twin brother Apollo in Bedlam and will do (and does) anything and everything to help and keep him safe. Apollo's "madness" is a deterrent and one of the biggest conflicts confronted by the lovers in this romance. As the third Ghost of St. Giles, Maximus is obsessive in his search for one particular murderer and his hatred of the gin mills. There is good reason for both, but this obsession effects his life, personality and all the choices he makes on a daily basis. Hoyt weaves all these threads together seamlessly to drive the romance to its expected happy conclusion.

There are old and new secondary characters that make an impact in this romance. Phoebe, Maximus's younger and almost blind sister is delightfully present and right on point as always. Captain Trevillion whose role has changed so radically that his presence makes me wonder, and Apollo, the most intriguing new addition to the already large cast of characters in this series. I, however, was quite happy to see the tiny appearance at the end of the remaining single Makepeace sibling, Asa. I am hoping that his story will take us back to St. Giles where I think Hoyt makes these romances come alive with the grit and atmosphere of the slums.

Despite the fact that this is the third book featuring a Ghost of St. Giles plot, Duke of Midnight is not predictable, and both the romance and the Ghost's story felt fresh within the Maiden Lane series. With central characters who are equally strong, intelligent, passionate, and balance each other out in and out of the bedroom, the romance between Artemis and Maximus is an excellent historical romance read and a fine addition to the Maiden Lane series. Highly recommended.