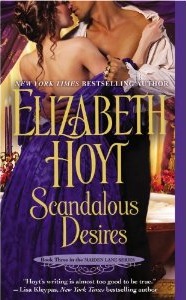 Can a pirate learn that the only true treasure lies within a woman’s heart?

“Charming” Mickey O’Connor is the most ruthless river pirate in London. Devastatingly handsome and fearsomely intelligent, he clawed his way up through London’s criminal underworld. Mickey has no use for tender emotions like compassion and love, and he sees people as pawns to be manipulated. Yet he’s never been able to forget the naive captain’s wife who came to him a year ago for help—and spent one memorable night in his bed...talking.

Widowed Silence Hollingbrook is impoverished, lovely, and kind--and a year ago she made a horrible mistake. She went to a river pirate for help in saving her husband and in the process made a bargain that cost her her marriage. That night wounded her so terribly that she hides in the foundling home she helps run with her brother. Except now that same river pirate is back...and he’s asking for her help.

I loved Wicked Intentions and thoroughly enjoyed Notorious Pleasures, Books 1 & 2 of the Maiden Lane historical romance series. However with Scandalous Desires, Elizabeth Hoyt has cemented my love of this series and officially makes it an absolute favorite. I loved this book!

Scandalous Desires opens with Mary Darling having been taken by Charming Mickey O'Connor and Silence demanding her return. It is then that she finds out that Mickey is the baby's father marking her as a target of the river pirate's enemies. Given the chance of staying and caring for Mary, Silence chooses to stay even if it means placing herself in O'Connor's hands again. Mickey has Silence exactly where he wants her, in his palace and at his disposal, or so he thinks. Silence is lovely and kind, but Mickey hurt her terribly in the past and although she'll do anything for the baby, she won't give in to Mickey. The previous year at her request river pirate Charming Mickey O'Connor saved her husband and exacted a terrible price that cost Silence her reputation and marriage. Soon after, her husband died at sea and baby Mary Darling was abandoned at her doorstep. Caring for her beloved Mary Darling helps Silence get through this time of sorrow, and she's not about to let a ruthless criminal like Mickey O'Connor keep her away from her baby.

In Scandalous Desires, Elizabeth Hoyt maintains the excellent atmosphere already established in the first two books of the Maiden Lane series by taking the reader back to the St. Giles slums as the setting for this romance, however she expands that setting by making her central couple inhabitants of St. Giles and keeping the action there.

As opposed to the first two books in the series, there are no aristocrats as protagonists in this story. Instead with Mickey O'Connor's character, Hoyt focuses on the life and personal history of a criminal who grew up in the streets of a slum and rose to power by thieving and killing. Mickey is unacceptable to society even as he is feared, envied and respected for his cunning, wealth and power by a certain element in St. Giles. But where Mickey deviates from the previous male protagonists in this series and where Hoyt pushes the envelope with this male character is in that she makes him a real criminal, with not only a violent history but a present life that is also filled with violence and danger, crimes and killing -- one that he doesn't want to give up.

I wondered how Hoyt would redeem such a character for the reader, or if she could. Of course Hoyt delivers and redeems him up to a point by exploring Mickey's past while he falls head over heels in love with Silence Hollinbrook. Mickey's year-long guilt feelings over how his actions affected Silence's life and his yearning for Silence's tenderness and passion make him a passionate and sweet romance hero. There is an extreme contrast between the acquisitive man who will go to criminal lengths to get more, and the man who needs love, passion and tenderness in his life -- the cynical vs. the vulnerable. Mickey is flawed and quite irresistible!

Silence fights her attraction to Mickey and holds on to what she believes was the perfect love she shared with her dead husband. However, once Silence sees behind the criminal and into the man that is Mickey and falls in love with him, she accepts and embraces that love. In this she is a more traditional female romance protagonist, yet Silence in her own quiet, loving and nurturing way is also a passionate, determined woman once she knows what and who she wants in her life. I admire her for loving Mickey no matter what others say about him, but also love the fact that she sticks to her beliefs when it comes to what it is best for herself and her beloved Mary Darling.

The plot is quite engaging with a mixture of action and quiet moments used to build the romance, and secondary characters that include a crazed criminal as Mickey's enemy, Mickey's gang of river pirates, where there are characters that fall under those gray areas, and of course Silence's family and an appearance by the the Ghost of St. Guiles. There are some violent scenes that set the tone for the overall story and really fit in with the St. Giles setting. I enjoyed all of it, including a brief appearance by Caire and Temperance and the set up for Winter's romance.

Scandalous Desires has everything offered by the first two books in this series: great action and pacing, interesting secondary characters, excellent atmosphere, an action-packed climactic scene, and to top it off an excellent passionate romance between two very different people who love and in the end complement each other perfectly. And don't worry, Hoyt not only uses sexual tension to build up the romance, but she also delivers by including plenty of her signature hot and sexy scenes. I enjoyed everything about this romance!

Now we wait for the next installment in the series and Winter's romance which promises to be an exciting one. I can't wait to read it!