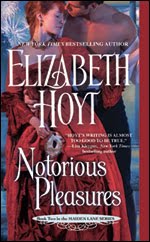 Their lives were perfect . . .
Lady Hero Batten, the beautiful sister of the Duke of Wakefield, has everything a woman could want, including the perfect fiancé. True, the Marquis of Mandeville is a trifle dull and has no sense of humor, but that doesn't bother Hero. Until she meets his notorious brother . . .

I loved the first book in this series. Notorious Pleasures by Elizabeth Hoyt, the second book in the Maiden Lane Series, was filled with intrigue, passion and flawed characters, making this a thoroughly enjoyable book.

I found some similarities and contrasts between the first two books of the Maiden Lane Series. On the surface, the male characters are considered unacceptable and scandalous by society. They are only tolerated because they are from powerful families, and there's a need for both men to be redeemed -- personally and publicly. Lord Caire from Wicked Intentions was sexually depraved and Griffin, Lord Reading, is secretly running an illegal gin in St. Giles plus he's a shameless rake with a shameful reputation.

On the other hand, the women fit their role perfectly. In Wicked Intentions, Temperance seemed to be the perfect widow of her class, performing charity in St. Giles -- a saint. In Notorious Pleasures, Hero seems to be perfection itself as a Duke's daughter and sister. She carries herself in such a manner as to make it so. She is Lady Perfect to Griffin. He is Lord Shameless to Hero.

However unlike Lord Caire who was highly sensual but brooding and not to everyone's taste, Griffin is a gorgeous character. He is charming, likable and witty, as well as passionate and highly sensual. Griffin is the type of male protagonist that almost makes the reader forget that he's ruthlessly and without remorse slowly seducing his brother's fiancé. The fact that his brother Thomas is a flawed character himself and unlikable to boot makes it even easier for the reader to accept the seduction readily.

Hero herself is no "Lady Perfect." She is also ruthless when it comes to deceiving Thomas. She has no feelings for him and is more concerned with finding and exploring how perfect she is not by going along with Griffin's seduction and even provoking it, than weather or not what she's doing is right or wrong. Hero is not concerned about Thomas' pride or feelings in that respect. Neither is she truly concerned about Griffin, not until almost the end of the story. She is, however, concerned with keeping up appearances for the sake of her brother Maximus, the Duke. In that respect, her character is very similar to that of Temperance in Wicked Intentions. They both come to late realizations about love or what love is.

I found it interesting that in both stories the male characters, the depraved Lord Caire and the rakish and seemingly amoral Griffin, fell passionately in love with the women first. In both cases, the women are the ones loving the sex but holding out emotionally.

Hoyt can write explosive sexual scenes as well as scenes full of sensual tension. In Notorious Pleasures you'll find plenty of both. Add to that the fact that the characters are not necessarily noble ones and are having an illicit affair, and the sensuality increases. Then you have the fact that somewhere along the line, Hoyt makes the all-around dishonorable actions of these main characters acceptable to the reader, and the story becomes downright interesting.

Hoyt also plays with atmosphere in this story. Wicked Intentions was full of it with St. Giles and its dark  and filthy cobblestone alleyways as the focus. In Notorious Pleasures, Hoyt jumps back and forth between high society balls, carriage rides, dinner parties and those same filthy and danger-filled alleyways in St. Giles. This contrast between lifestyles gives the reader a well-rounded idea of the environment where these characters dwell, as well as why the events taking place are so important to all those involved. The gin mills, the poor, the orphanage, Parliament, the aristocracy -- they are all interrelated in this story.

As in the first book, I loved the secondary characters. There's a set-up for the next book involving Silence and the orphaned baby Mary Darling. I loved every single mention of these two characters and the orphanage in St. Giles and can't wait for that next book and their story. The Ghost of St. Giles makes another appearance, and I'm still curious.

Notorious Pleasures ends with a bang with lots of action, love and redemption. I truly enjoyed the ending. Most of all I enjoyed the sizzling passion coming from all those flawed characters. Griffin was one of those passionate male protagonists I couldn't help but love and savored every minute he was on the page. Now I can't wait for the next installment in this series, Scandalous Desires, Book 3.

Visit Elizabeth Hoyt here.
Posted by Hilcia at 10:34 AM