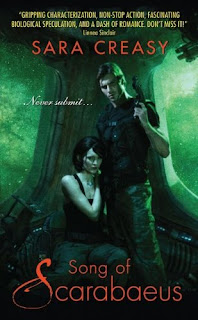 Trained since childhood in advanced biocyph seed technology by the all-powerful Crib empire, Edie's mission is to terraform alien worlds while her masters bleed the outlawed Fringe populations dry. When renegade mercenaries kidnap Edie, she's not entirely sure it's a bad thing . . . until they leash her to a bodyguard, Finn—a former freedom fighter-turned-slave, beaten down but never broken. If Edie strays from Finn's side, he dies. If she doesn't cooperate, the pirates will kill them both. But Edie's abilities far surpass anything her enemies imagine. And now, with Finn as her only ally as the merciless Crib closes in, she'll have to prove it or die on the site of her only failure . . . a world called Scarabaeus.

Song for Scarabaeus is Sara Creasy's debut novel and the first of two books that follows the exciting space adventures of cypherteck Edie and her bodyguard Finn. I love the "kick-ass Captain" as the female protagonist just as much as the next reader, but that's not Edie. No, Edie is a geek and I loved that about her. Now, don't think that because she's technologically brilliant Edie doesn't kick ass. Technologically speaking, she does.

Edie is a half-breed and she grew up as an outcast in the backwater planet Talas. At age 10 she was picked up by the Crib for what they saw as her potential abilities to work with biocyph (biological and cypher technology). By way of computer chips implanted in her brain and body parts, Edie is able to program and decipher complex computer (dry teck) and biological (wet teck) technologies.  Her abilities are rare and valued throughout the universe and she's kept under wraps and well guarded by the Crib. But rovers (space pirates) kidnap her with the aid of serfs who have been promised freedom in return. Finn is one of those serfs.

Finn's serf or slave status doesn't change when they reach the rover's ship, the Hoi-Polloi. The rovers place a boundary chip or leash on him that ties him to Edie. In other words, he can't stray away from her or the explosives implanted on his brain kill him instantly. Also if she dies... he dies, so he has no choice but to guard her with his life, as they are both forced to carry on with the rovers' mission. The mission takes them on to Scarabaeus, a planet that the Crib attempted to terraform years earlier and Edie's secret obsession.

Song of Scarabaeus is not heavy sci-fi. Instead it's an engaging, well-written story with the main focus on those sci-fi details and a touch of romance. I enjoyed Ms. Creasy's sci-fi world building including the space terms that differ a bit from others I've read, but are easy to follow. The action and pacing are excellent. The story begins with action, slows down to build on the plot and picks up to an action-packed finish. I was never distracted from the story and finished the book in two sittings. Some of my favorite scenes take place on the planet, Scarabaeus. There are creepy, eerie as well as action-packed and intense moments. There's nothing like space creepy-crawlies to light my fire when I'm reading sci-fi, lol!

The plot is quite interesting with the overall storyarc detailing how the powerful Crib empire creates a monopoly out of terraforming new planets, populating them and then enslaving Fringe worlds through their dependency on technology. Yet, there are many grey areas presented by the author through Edie's own personal conflicts about the different entities involved, the technology itself and how it's used, as well as characters introduced. Are they good or evil, or are they a bit of both depending on their agenda?

The characterization is well done, especially for a first book where some characters are highlighted more than others. Edie is well developed and a thoroughly likable character. Although not a physical threat, Edie uses her technical abilities, but better than that she also makes great use of instincts by exhibiting good insight and judgment. I love her humanity and the way she chooses to become independent and to go against the odds to achieve her goal. Enough is revealed about Finn for this story's purposes, but he is still a mystery by the end. He's definitely the most intriguing character so far. The other secondary characters are interesting for their "grey" areas with some better drawn than others.

There is a touch of romance and I enjoyed the way that developed. It's not too fast or too blatant, instead the emotional connection and building chemistry between the characters seems like a natural progression. As it turns out, there is a cliffhanger at the end of this book and those usually bother me. However although you can tell there's a continuation coming, the story is not cut off at an awkward moment and it ends well enough. Having said that, I'm glad I don't have to wait long to read the next book, Children of Scarabaeus, Book 2.

The best recommendation I can give Song of Scarabaeus? I couldn't stop reading the book and couldn't wait to finish it. I recommend it to readers who love sci-fi and sci-fi/romance. I think this is an excellent debut novel for Ms. Creasy and will definitely look for her books in the future.