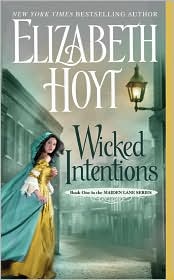 I finally read Wicked Intentions by Elizabeth Hoyt and loved it. From the beginning I was caught by the dark atmosphere, the grim setting and flawed characters. However, the story itself kept me turning those pages.

Ms. Hoyt sets Wicked Intentions in St. Giles, a poor, dirty, and grim section of London that we don't often see highlighted in historical romance novels. Our female protagonist Temperance and her brother Winter work in a charity home for the foundling children of whores, the poor and desperate. One evening on her way home from picking up just such a child, Temperance comes across a man in an alley standing over a dead body and to her consternation this man follows her home with a proposition.

Lord Caire is in St. Giles investigating the brutal murder of his long time mistress, but he doesn't know this section of London, and its inhabitants won't answer his questions or give him the time of day. The way he figures it the respectable and knowledgeable Mrs. Temperance Dews would serve as the perfect guide through the streets and alleys of St. Guiles. He'll pay her for her services, after all everyone has a price.

Temperance is not happy that this man followed her home and broke into her parlor, but she's not about to show her discomfort. She knows he's a Lord and listens to his proposition with an open mind. Being a realist and in need, Temperance proceeds to negotiate the best of terms with Lord Caire. She'll serve as his guide if he pays for her services, and introduces her to the appropriate set within the ton until she finds a respectable patron for the failing and bankrupt charity home. A deal is struck and they set off.

I really enjoyed Temperance and Caire's murder investigation. It took them to some of the darkest places in St. Giles, setting both tone and atmosphere by giving the reader a real feel for the place and its inhabitants. They encounter everything from gin whores and madams, to thieves and rogues and visit a mercantile, dark pubs and whore houses as they face the ever-growing dangers that await them as they navigate dark streets and alleys.

However, it is not all grimness and dirt, there are also balls and musicales included in this story. Caire keeps his part of the deal and by attending those events Temperance experiences a different lifestyle. In the process she finds that people are not so different after all, and that the glitter of the ton doesn't necessarily hide the ugliness present underneath some of its aristocratic members. Hoyt slowly develops the romance between Temperance and Caire during the murder investigation. However lust is another matter entirely, they both feel it and that's what Hoyt uses as a building block to the romance.

I was taken from the beginning by the sexual tension and chemistry, and eventually the heat that Temperance and Caire generated as a couple. Caire doesn't believe that he's capable of feeling emotion and he suffers pain when physically touched by others. Plus, he has the reputation of being sexually deviant throughout both the ton and St. Giles because of his peculiar sexual preferences. In Temperance, Caire finds a passion for life and a vibrancy that he can only envy and wants to absorb, even if it is only by being in her presence.

Temperance is a passionate woman who represses her emotions behind a mask of widowhood, dark clothing and plain looks. She hides passions, lust, guilt, secrets and self-contempt behind a façade of duty and self-confidence. Temperance is shocked when Caire sees through that mask and relieved when she can be herself with him. Temperance and Caire scorched the pages with their desire and yearning for each other. There's growth for both characters throughout the development of their relationship and romance. It was wonderful to experience how they came to terms with their weaknesses and finally found solace and love in the midst of all the grit and tarnished glitter.

Hoyt's characters are dark in Wicked Intentions and she exposes their foibles and sins. This includes the whole cast of characters, from central to secondary, some of which are quite fascinating. I was intrigued by some of the secondary characters and hope to meet them again as their stories were left a mystery or unfinished: Silence, Winter, Asa, O'Connor and the Ghost of St. Giles. There's a secondary story involving Silence and her husband that was both sad and engaging and one that I hope will be further developed.

I loved Wicked Intentions, the setting and atmosphere, central characters, romance, plotting and some of the unforgettable secondary characters. This is a series I will definitely be following in the future. Notorious Pleasures is already on my list of books to read in February 2011.

KMont's 2010 Year of the Historical Challenge - November Review
Posted by Hilcia at 12:15 PM