As some of you may or may not have noticed, Musings of a Bibliophile is off the air. I'll be highlighting some of my favorite books or reviews from 2009 once in a while here at Impressions. I thought since the last book in the Bridal Quartet has been released and I'm gathering all my impressions of this series, Vision in White would be the perfect review to highlight at this time.

Looking back at my review, I find it interesting that the business, Vows, struck me as a secondary character when I read that first book. That feeling never changed throughout the series for me. 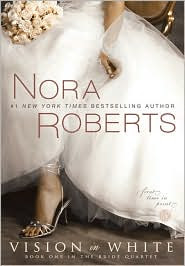 I have read many of Nora Roberts' books --part of my book case is full of what I refer to as my "comfort reads" and Nora's contemporary romances make up a large percentage of those reads. So, I was quite happy when I heard she was releasing a new quartet of contemporary romance books, no paranormal, suspense or villains included, thank you. Vision in White, the first book in this quartet is just that, a romance.

Parker, Emma, Laurel, and Mackenzie are both childhood friends and co-founders of Vows, an upscale wedding planning company in Connecticut. They run the business together and each plays a key role. Mac is Vow's super talented wedding photographer and from the beginning it's obvious that she feels most comfortable when behind the lens. She almost seems to prefer living life in "moments" she attempts to capture through her camera.

Mac's childhood was an unhappy one--her parents divorced and promptly remarried several times. Linda, Mac's mother, also had multiple relationships throughout Mac's life and is portrayed as a selfish, self-centered woman who neglected Mac and her needs. Most of Mac's inner conflict comes from trauma caused by a dysfunctional relationship with her parents--mainly her mother--a trauma she can't seem to shake even as an adult. As a result, Mac's family are her friends; they are the only ones she can trust and who have been there for her since childhood. Roberts succeeds in portraying this group of friends as a family who loves, disagrees and fights when necessary.

While planning the wedding for a childhood friend, Mac meets the bride's brother, Carter Maguire, in an unforgettable scene that is painfully amusing. Mac doesn't quite remember him, but Carter certainly remembers her. Mac was that unattainable and unforgettable high school crush for him and here she is again in all her glory--the crush flares up again with a vengeance. Shy and clumsy, Carter is also a handsome and eye catching high school English teacher. His honesty and insecurities provide some of the most humorous and sweet moments in the story.

Carter's friend Bob, a fellow teacher, who decides to give Carter unsolicited advise on how to "go get" Mac, became one of my favorite secondary characters. I enjoyed more than a few chuckles between their dialogue and some of Carter's internal debates about Bob's advise. Bob went as far as giving Carter a list of suggestions and lines to use at strategic moments. Carter started calling them the "Law of Bob." Of course, the dreaded list became a problem; I thought the Law of Bob was going to drive the poor man to drink.


Following, there were several suggestions for greetings or initial conversation points such as You look beautiful, Great dress, I saw these (flowers) and thought of you.

Carter stuffed the list back in his pocket before any of them imprinted on his brain. But not before he'd noted Bob's decree to tune the car radio to classic lite or smooth jazz, on low volume.

He drove the next few miles while obsessing about background music before snapping off the radio. The hell with it. He turned into the long, winding drive of the estate.

"What if she's not wearing a dress," he muttered, as despite all efforts Bob's list popped into his mind. And unfortunately, his own question had the image of Mac in black pants and white bra crowding Bob out.

"I don't mean that. For God's sake. I mean, she might be wearing something otherthan a dress. What do I say then: Nice pants? Outfit, outfit, great outfit, You know it's called an outfit. Dear God, shut up."

I liked the way Carter pursued Mac. He gave her the space she needed to come to terms with her inner conflicts, but he was also persistent and honest about his feelings to a fault. I truly couldn't see how she was going to resist him. On the other hand, Mac was more than surprised when she fell in lust with the professor--he was definitely not her type and she didn't really believe in love or marriage. So what was her answer? An affair. Mackenzie's struggles with her feelings and Carter's belief in his are the core of this story.

Mac's friends are very much a part of Vision in White. We not only get to meet Parker, Emma and Laurel, but also a slew of brides, grooms and assorted family members that make the business as much a part of the story as the characters. Mac's friends as secondary characters, were developed enough for this story --we definitely get a good sense of the dynamics in their friendship and individual personalities are well established. I'm sure we'll get to know each one of them better when their stories are told.

Their business Vows is portrayed almost as a secondary character instead of just the background for the story. Nora's research on wedding planning was excellent; the details are amazing -- from the planning, to the flower arrangements, to the catering and the dresses, this reader learned more than she thought possible, or maybe even cared to, about the business.

I found this to be a sweet, enjoyable romance between the two main characters with plenty of humor and a lovable Beta hero, where the conflict between them was minimal but concentrated mostly on the heroine's personal issues to reach that happy ending. A nice group of friends who are obviously going to have their own romantic happy ever afters added depth to the story. And I can't conclude my impressions without mentioning Vows, the business that felt more like a secondary character and where I thought Roberts' research on wedding planning was excellent, but personally found it to overwhelm the story at times. I give this one a B.